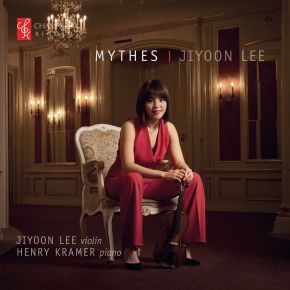 As part of her prize for winning the Windsor Festival International Strings Competition in 2015, South Korean violinist Jiyoon Lee makes her debut recording on Champs Hill Records with duo partner Henry Kramer in a recital of Stravinsky, Wieniawski, Bartok, Szymanowski and Ravel. · Winning the David Oistrakh competition in 2013, Jiyoon Lee subsequently won prizes in the Indianapolis, Queen Elizabeth and Carl Nielsen competitions, in addition to Windsor, and is now performing around the world. Henry Kramer has similarly won prizes in the Queen Elizabeth and Montreal competitions and an award winner at the Julliard School.

Jiyoon Lee about the album: "The “Mythes” album is all about feelings, emotions and imagination which are the most crucial elements of music-making. The entire process of recording this disc with the one and only Henry Kramer has been a pure joy, and I sincerely hope it will lead you to a journey full of adventures and fantasies."