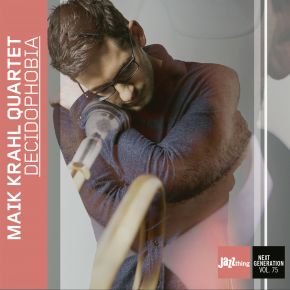 It is a confession: Maik Krahl makes fear a subject of discussion. Fear of making decisions or doing something that you might regret later. The fear of making an irreparable error, perhaps ruining your future as a result, being rejected or giving offense. Not a few people are inclined to postpone answers to urgent questions in the hope that everything will somehow solve itself. But only waiting even increases the problem.

Psychology calls this phenomena “decidophobia”. “Especially as a jazz musician, you are forced continually to make decisions. Everything that you do has a direct influence on the band and the character of the piece. You cannot simply trust any mechanisms. It is a question of with which musicians I record, and which pieces are included on the CD,” Krahl explained. For him, it is less a question of fear of possibly negative consequences, the trumpeter assured. “I would instead call it decision uncertainty.” Because it concerns a lot in the current case for Krahl. After all, it is his first album under his own name and which is being released in the highly respected Jazz thing Next Generation series, which has supplied the German-language scene with fresh blood and new heroes for almost 15 years. As if that were not a sufficient burden, Maik Krahl can also set the candle on the birthday cake, because he of all people is the 75th protagonist of JTNG. This apparently provides sufficient reasons for him self-critically to call his debut “Decidophobia”. Then congratulations!

Although the musician born in Bautzen in 1991 really has no reason to worry. The seven songs on the CD, which he recorded with Bruno Müller (guitar), Oliver Lutz (bass), Hendrik Smock (drums) and Constantin Krahmer (piano), are brimming with bold inspiration, amazing solutions, compositional finesse and stupendous virtuosity. At the same time, you can detect an interesting portfolio of influences, which Maik Krahl absorbed voraciously during his studies at Carl Maria von Weber College in Dresden as well as Folkwang University of the Arts in Essen. However, nobody should be surprised at this with teachers such as Till Brönner, Malte Burba and Ryan Carniaux. The latter praises his student in the liner notes as an extraordinary young musician, “who is solidly rooted in the past, oriented to the needs of the present in everything he does and at the same time always looks to the horizon to recognize at an early stage everything that the future might bring forth.”

The fact that decisions here cannot be easy is obvious. Maik Krahl selected a subtle, swinging approach with a lean-playing rhythm section, “which also corresponds to my strong relationship to jazz tradition, to the great trumpet players such as Chet Baker, Kenny Dorham, Clifford Brown and Louis Armstrong.” His own compositions such as “Dance Little Walnut Dance”, “Demian”, “Number 3”, “Via Metauro”, “It Happened To Me”, “Ombrophily” and the title piece produce a refreshingly modern, unpretentious impression, while the band leader dares to take a courageous step into hardly developed no-mans-land with his decision to amplify his mildly shining, robust trumpet sound with an electric phaser in extensive sections.

Maik Krahl might brood about a lot that is wrong or right, what makes sense or what does not. However, precisely because he left nothing to chance, his debut CD sounds above all courageous and daring. It is as if someone would dive from a cliff not knowing whether he is going to land in water. A risk that has paid off in all respects, not only for Ryan Carniaux. He has not regretted the decision, he writes, to dedicate time to this great CD. Everything done right!