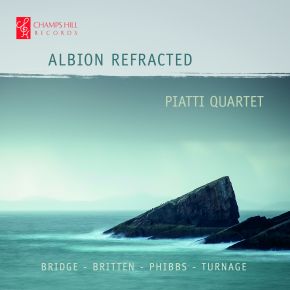 The inspiration for the album began with their commission of Joseph Phibbs’ String Quartet No 1 in 2014, premiered at the Rye Arts Festival, where audiences were enthusiastic to hear the work again.

The finale to this British-themed compendium owes its inclusion to the Wigmore Hall International String Quartet Competition, where the Piatti Quartet won a special prize in 2015 for a performance of Mark-Anthony Turnage’s piece Contusion.

This is the world-premiere recording of Twisted Blues with Twisted Ballad, premiered in 2010 by the Belcea Quartet. In this piece the outer movements draw on themes by Led Zeppelin, from Dazed and Confused and Stairway to Heaven and the central movement is dedicated to Fausto Moroni, long-term partner of the composer Hans Werner Henze with whom Turnage studied.