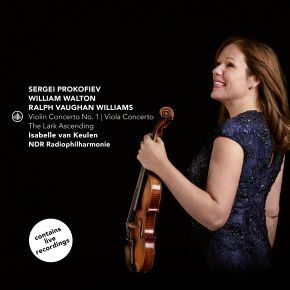 Here is a disc whose contents seem odd as it couples the violin concerto of a (still) Russian composer to the viola concerto of an English one. Instead, the coupling is very clever since Prokofiev’s First Violin Concerto, whose premiere was in 1923 (while the composer was still living in France, a few years before his return to Soviet Union) served as a much-admired model to Walton’s Viola Concerto, whose first performance was played by Paul Hindemith in 1929. The similarities between the two works go beyond the three-movements structure slow-quick-slow and concern themes, accompaniments and the rondo form of the virtuoso central Scherzo.

The smart idea of such unusual coupling came to one of the few great living violinists who can really play the viola with equal skill: Isabelle van Keulen. This glorious disc is crowned by the orchestrated version of Vaughan Williams’ masterpiece The Lark Ascending.
One of German radio best orchestras, the NDR Radiophilharmonie, is conducted by Andrew Manze (Prokofiev), Keri-Lynn Wilson (Walton) and Andrew Litton (Vaughan Williams).

"
25-02-2019 The Strad
"There are myriad subtle insights throughout where she, Manze and the orchestra are in delicious collusion. ...the orchestra shines best in a warm and detailed recording."
01-01-2019 Luister
"It is nice to be able to compare them, and even better to once again establish that violinist Van Keulen also belongs to the top with the viola. Beautiful. Rating: 9."
21-12-2018 Jo Cornille
"Isabelle van Keulen plays it all with ease and contagious enthusiasm, one feels how these three works belong to her favorites."
13-12-2018 De Volkskrant
"Van Keulen is in her element and there is a nice exchange of ideas between the musicians in the orchestra and the soloist."
05-12-2018 Pizzicato
"