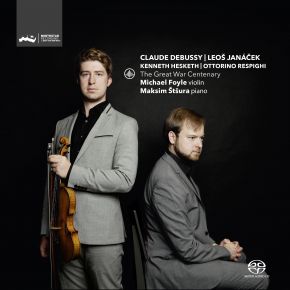 ‘Music expresses that which cannot be put into words and yet cannot remain silent’, wrote Victor Hugo in 1864. Half a century later, his words had never felt more pertinent. Every composer writing during World War I found a unique way, through their music, to describe and protest against the horrors that were tearing civilization apart.

Created in the depth of morbidity, Debussy’s parting musical gift is a subtle, dignified and heroic celebration of youth and joie de vivre. A sense of patriotism in the war years links Debussy with the foremost Moravian composer of the day, Leoš Janáček. Ottorino Respighi was only in his thirties when the war broke out. His 1917 Sonata for violin and piano is a work of Romance written in the time of hate, a reminder that the past and the future remain beacons of hope in desperate times.

Commissioned for this recital programme to reflect on the centenary of The Great War from our own times, Kenneth Hesketh’s Inscrizione, derivata, subtitled ‘A lie to the Dying’, is a quasi-meditation on the dying man, his anxious thoughts and the spasms of his failing heart being weaved conspicuously into a narrative of disquieting melancholy.

I am so excited about this CD and can't wait to get my copy I am a huge fan of Michael Foyle as I heard him when visiting London. His violin playing is superb technically and emotionally. I live in western Canada and hope he will come and play for us here. I see he plays all over Europe 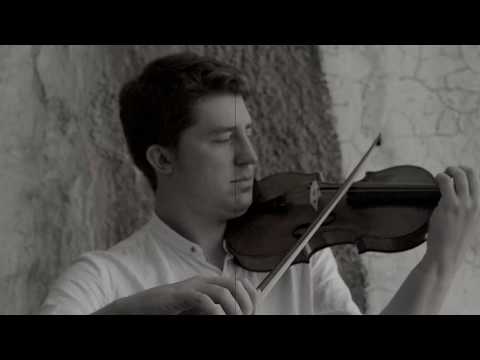 Ottorino Respighi (composer)More information
28-01-2019 BBC Music Magazine
"Foyle's playing is remarkable in its accuracy, tonal focus and impressive range of musical options."
01-01-2019 Luister
"With this cd the duo delivers a dream debut - ... Admirable how Foyle and Štšura tell the story completely in symbiosis and in the service of music. Rating: 10."
07-12-2018 Luister
"We both play our concerts completely without paper. This results in a lot of freedom and interaction."
05-12-2018 Pizzicato
"

"
29-11-2018 Stretto
"The acoustics of the church where this is recorded is excellent, there are many chamber music concerts and CD recordings in this church. Consequently: an optimal sound recording and played phenomenally. Highly recommended."
09-11-2018 Radio 4
"CD of the Week: a subtle, dignified and heroic celebration of youth and the joy of life."
28-10-2018 HRAudio
"I do not know for how long Michael Foyle has been partnered with pianist Maksim Štšura (in any case since 2015), but in a short time span their teamwork has become impeccable. Both shifting so admirably from one musical idiom (French: Debussy) to another (Czech: Janáček) and yet two more totally different ones (Italian: Respighi; British: Hesketh). How much better would you like to have it?"