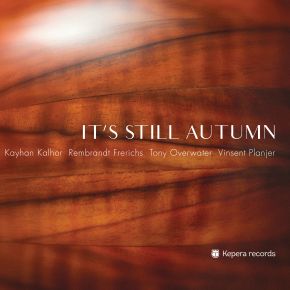 During the fall of 2013, they first met at November Music Festival and since then there has been a successful collaboration and a deep friendship between the Iranian kamancheh grand master Kayhan Kalhor and the three Dutch jazz musicians of the Rembrandt Frerichs Trio.

The musicians
Kamancheh player Kayhan Kalhor, known for his successful albums for ECM and his participation in Yo-Yo Ma's Silk Road Ensemble, finds the ideal travel companions in pianist / composer Rembrandt Frerichs, bass player and Boy Edgar prize winner Tony Overwater and drummer Vinsent Planjer. Together they travel through contrasting cultures and styles and their remarkable instruments merge into an absolutely unique sound that transcends all boundaries and gets an international audience deeply involved.

The music
After a large number of sold-out concerts at festivals, concert halls and TV shows in the Netherlands, Iran (3 evenings 3000 people per concert) and Great Britain (Barbican Hall), the long awaited album It's still Autumn has finally arrived. The album is arranged in two parts, Dawn and Dusk. Both parts, consisting of several compositions that are woven together through improvisation, are a musical journey through an imaginary autumn landscape. It is music best enjoyed while listening attentively, to be carried along in an initial stillness that slowly develops into a swirling river, only then to calm down again or end in a nightly thunderstorm.

The instruments
The kamancheh is the Iranian knee violin known for its heartrending, melodious sound. The fortepiano, the forerunner of the modern grand piano, comes from Mozart's time and is reminiscent of the santur, the Persian cimbalom. The violone comes from the early Renaissance; it is the forerunner of the double bass and can fulfil a melodic, harmonic as well as a bass function with its 6 strings and lighter timbre. The Whisper Kit, an invention by Vinsent Planjer, brings together percussion instruments from various cultures and periods that create a rich rhythmic basis.

Tony Overwater (featured)More information
Vinsent Planjer (featured)More information
06-12-2019 Luister
"Luister 10: A nicer mix than that of the fortepiano, the self-designed whisper kit, the Iranian violin and the violone is hardly conceivable."
01-10-2019 De Nieuwe Muze
"Music with a carry-along guarantee"
02-08-2019 Rootstime
"Hallucinating music, I can not describe it better, an absolute must whether you are a fan of jazz or world music or just enjoying music. Expressing the music in words is an almost impossible thing, just listen and shudder!"
01-08-2019 Songlines - UK
"This album was definetly worth the wat; let's hope the relationship continues to bear such exquisite fruit"
03-06-2019 Jazz Bulletin
"Music without limits."
27-05-2019 Jazzthing 06 08 2019
"...On these sound bodies the musicians play soghafte, approaching, up and weighing, mystically tinted, mysterious sounds, which echo in the inclined listener for a long time.

12-05-2019 Orsinos Lied
"......Rembrandt Frerichs from Rotterdam with his trio is one of the most important young jazz bands in the Netherlands...
The result is simply stunning. Oriental improvisation meets jazz and the styles merge perfectly. ...