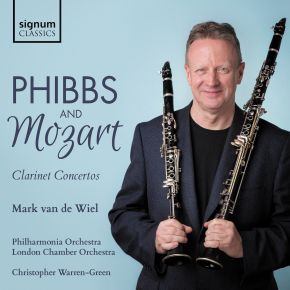 Mark van de Wiel joins the Philharmonia Orchestra under Christopher Warren-Green in the premiere recording of Joseph Phibbs’ Clarinet Concerto, praised by The Sunday Times following its UK debut as a work “that will surely be performed all over the world”. Following a long friendship between composer and soloist, Phibbs and van de Wiel collaborated to create this stunning and virtuosic new work for the clarinet and orchestra, which features a thrilling cadenza at the end of the first movement.

It is paired with a scintillating live concert-recording of Mozart’s timeless Concerto for Basset Clarinet in A Major, K. 622, performed with the London Chamber Orchestra.