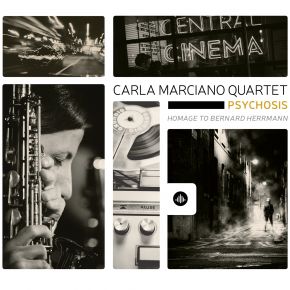 Carla Marciano:
"This album is my heartfelt homage to one of the greatest geniuses of film score, the composer and conductor Bernard Herrmann, whose music has dazzled me since I was a child. It has been very interesting to arrange, revise and adapt, for a jazz quartet, some of the best known themes from outstanding soundtracks Herrmann wrote for equally outstanding films - all psychological thrillers (hence the title Psychosis) - by brilliant directors, including Marnie, Psycho and Vertigo by Alfred Hitchcock, Taxi Driver by Martin Scorsese and Twisted Nerve by Roy Boulting. Bearing a classic feel and originally conceived for orchestras, the tracks in this album were arranged in full respect of the originals, leaving intact, for example, the beauty of the melodies, while at the same time creating new improvisational spaces that would allow our quartet to maintain its own identity. This also gave us the opportunity to progress in a musical journey we embarked on starting with the first album (this is our fifth), and me, personally, to hold the course of my visceral, improvisational language, always instinctive and open to risk, an expression of my emotional, spiritual and existential self, baring my soul in absolute freedom through no compromise whatsoever, but rather driven by a strong desire for research and experimentation. I consider the emotions and stimulations generated in me by Herrmann’s music, together with the films in which it’s featured, a wonderful gift. I hope I have been able to thank him through our heartfelt work.

The additional track is also dedicated to another great genius of film score, John Williams, who wrote the soundtrack for the famous movie saga Harry Potter, whose main theme was arranged by Alessandro." 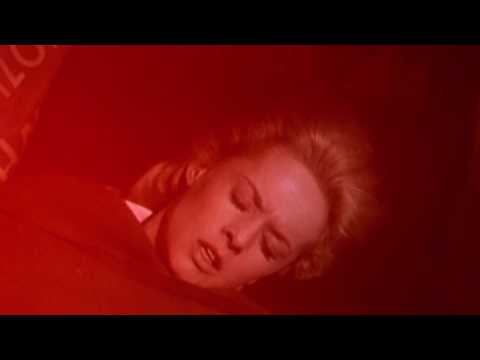 30-06-2021 the Absolute Sound
"I recommend Psychosis to anyone who loves the music of Bernard Herrmann or who wants to hear jazz that’s modern, hip, and edgy."
15-06-2021 Jazz Views
"This is a truly superb recording that fuses together the genius of Hermann with the intensity, vision and jazz sensibility of a superb saxophone player and her trio, to form a striking "tour de force" of musical panoramas, that can easily stand alone as a fine jazz album in its own right as well as a fresh and compelling reprise of Herrmann's great scores."
15-05-2021 Jazz Magazine
"This tribute to the music of the great film composer who died in 1975 loops on my turntable ... The way in which this remarkable Italian saxophonist native of Salerno appropriates them via her burning viola is the best way to bring them back to life. Carla Marciano takes us, transports us to “Joncoltanian” lands, but without being satisfied with playing each theme on the sly and then unrolling her solos. Because his arrangements are as inventive as his improvisation."
05-04-2021 Bebop Spoken Here
"This Marciano has the same kind of musical power that Rocky Marciano had with the big difference that she knew when to back pedal and dance like Alì. Put the two together and you have an unbeatable combination whether in the ring or in the recording studio.Yes, Marciano has both power and pathos in her playing.
Quite an amazing album"

01-03-2021 Musical Memoirs
" I am captivated by the Marciano arrangements and her extraordinarily strong abilities on the saxophone.  She plays with such determination, excitement and tenacious abilities that it's hard to imagine this is a female player.  She is so strong! This is an album you will listen to over and over again, with pure surprise and pleasure."
15-02-2021 In a Blue Mood
"
I was impressed by Marciano and her Quartet's capture of the dramatic aspects of Herrmann's musical themes ... An outstanding recording.
"
15-02-2021 Jazz & Blues Report
"After the group's memorable renditions of Herrmann's themes, the album closes in a Coltrane-ish mode. Marciano plays swirling, serpentine sopranino sax on La Sorte's arrangement of John Williams' "Theme from 'Harry Potter' (Hedwig's Theme)." It is another engrossing performance on an outstanding recording."
02-02-2021 Jazz Weekly
"

Some of the greatest film scores were composed by Bernard Herrmann (1911-1975), and leader Carla Marciano uses her sopranino and alto saxes to team up with Alessandro La Corte/p-key, Aldo Vigorito/b and Gaetano Fasano/dr to deliver some rich interpretations of some of his most exciting themes.

"
18-01-2021 Makingascene
"It’s no surprise that she is considered by critics as one of Europe’s best talents."
04-01-2021 Jazzhistoryonline.com
"Italian saxophonist Carla Marciano has created a unique tribute to Herrmann in her new CD, “Psychosis” which reimagines Herrmann’s melodies into a jazz setting."
02-01-2021 Jazzitalia
"

"Undoubtedly a very successful operation, drawing some famous tracks, never rearranged in this guise before, and proposing them through a brand new identity that emerges completely.""
23-11-2020 Jerry Jazz Musician
"Exquisite and powerful renditions of memorable music from films"
16-11-2020 makingascene
"Hailed by many jazz-centric outlets for her technique, energy, expressiveness, and improvisational bent, her playing is nothing short of stunning."
09-11-2020 Take effect
"Marciano and company pull off an impressive outing here, where deft and daring textures are never predictable and always exciting."
05-11-2020 Part Time Audiophile
"There'll be a moment when you think you know where you're going, and you'll hear a few notes and get ready for the reveal and just like that you're somewhere you didn't expect to be. Does that sound exciting? It is, very much so."
11-08-2020 The JW Vibe
"

A richly nuanced yet powerfully explosive set that digs deep into the musical heart and mind of the legendary film composer and using his thematic genius as a springboard for artful, freewheeling improvisations

The tones Carla graces your ears with from her reeds are absolutely exquisite... I have no doubt that this tune will be on jazz DJ playlists around the globe in constant rotation! I give Carla and her players a MOST HIGHLY RECOMMENDED rating for this beautiful (and somewhat overwhelming) jazz journey

Marciano plays with much passion and intensity, capturing along with the group the urgency and spine-chilling qualities of the Herrmann melodic themes.

One of the best jazz albums the continent had to offer in 2019.

Psychosis" is one of those records that don't get made every day: a punch à la Mike Tyson and a caress à la Kim Novak.

This homage to Bernard Herrmann stands above the average Italian and international productions. Carla Marciano's rearrangement is exemplary and the music is spellbinding

"
01-12-2019 Suono
"A saxophonist with a strong personality and of undoubted value, with "Psychosis" Marciano has authored a piece of magmatic and circular music, which should belong in the category of classical aesthetics"
01-12-2019 Audio Review
"With technical magnificence, Marciano communicates the sincerity of her proposal with fitting expressive intuitions and very personal imaginative impulses."
17-11-2019 Music Zoom
""Definitely to be included among the Italian records of the year.""
01-11-2019 Il Ventuno
""Psychosis" is a powerful, seductive and, above all, uncommon record, wrapped in a modern aura of classicism, but with a pulsating rhythm and a chromatic variety of tones and ideas which go beyond the concept of descriptive limit of a soundtrack.""
21-10-2019 Jazz convention
""Psychosis" is a measure of Marciano's character: never hold back, always give your best.""
01-10-2019 L'Avenir
"

A superior album with beautiful music that is beautifully performed, which is not only reserved for jazz lovers, I think.