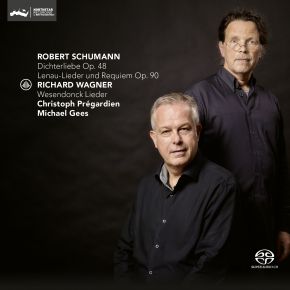 Robert Schumann was the most confessional of composers. And many of the songs from his great Liederjahr of 1840 were in essence love songs to Clara Wieck. In them he could express overtly what had been merely implicit in his piano music: his fears and longing, his passion and devotion, his pain at their separation, his vision of sexual and spiritual fulfilment, and his recurrent fears of losing her.

In Dichterliebe (‘Poet’s Love’) Op.48, he turns again to the pithy verses of Heinrich Heine’s Buch der Lieder.
On one level, Dichterliebe can be heard as his most piercing recreation of the fluctuating emotions he had experienced during his long courtship of Clara.

Schumann’s late Lieder have too often been dismissed as the products of an increasingly tired, sick mind. True, they tend to be more elusive than the songs of 1840, with piano parts that are often self-effacing and/or tortuously chromatic. But there are more than enough fine songs among them to challenge the cliché that Schumann’s genius declined irredeemably after the early 1840s. If the songs of 1849-52 are sometimes less ‘melodious and direct’ than their predecessors, that does not automatically make them inferior.
In August 1850, Schumann set six poems by the unstable and ultimately insane Austrian poet Nikolaus Lenau (1802-1850), whom he had briefly met in Vienna in 1839. Like Schumann and Wolf, Lenau spent his last years in an asylum, his mind destroyed by syphilis. Schumann was ill and dejected at the time, and his mood is reflected in these poems of satiety, oppressiveness and transience.

As a tribute to the dying poet (who he initially believed had already died), Schumann appended to the Lenau group one of his rare religious songs: Requiem, a setting of Héloïse’s lament for Peter Abelard. For this quasi-operatic music of solemn grandeur and mounting exaltation, Schumann devised a swirling keyboard accompaniment that takes its cue from the poem’s image of angelic harps.

During the autumn of 1857 Wagner began a set of five songs to poems by Mathilde Wesendonck, written in evident imitation of Wagner’s hothouse Tristan manner – one of the very rare occasions when he set words other than his own. The Wesendonck Lieder, as they are now known, were revised and completed in 1858, and first performed as a cycle in July 1862 at a country house belonging to the publisher Franz Schott.

Each of the songs shares with Tristan the concept of ‘endless melody’, a saturated, dissolving chromaticism – the musical emblem of unstilled desire – and a feverish, oppressive atmosphere.

Richard Wagner (composer)More information
21-02-2020 Fanfare
"Conveyed with dignity but with little nostalgia by both Prégardien and Gees."
19-02-2020 American Record Guide
"

"
30-01-2020 Gramophone
"Another fine release from this superb singer."
13-01-2020 Music web International
"Truly impressive!"
29-11-2019 Scherzo
"In his interpretation of the famous lieder cycle [Dichterliebe], he still follows a very vitalistic approach where he joins a youthful excitment to a flawless knowledge of each text inflection... the voice has less flexibility than before but it has gained in breadth and scale, which are ideal features for Wagner's Wesendonklieder... [Lenau-Lieder] Pregardien wonderfully conveys the composer's fragility and intensity, thanks to a most refined technique - impressive is the quality of the pianissimi in every pitch - and an impeccable elocution. Michael Gees, careful partner with a beautiful tone, plays a meaningful role in this recording great lyrical flying."