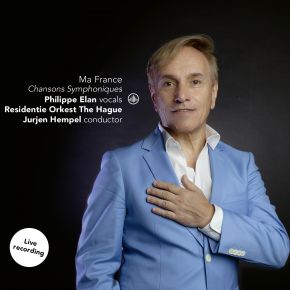 Philippe Elan was born in Gascony, in the south-west of France, in 1960 and moved to the Netherlands in 1986. Ever since, he has frequently been giving solo programmes of French chansons in theatres together with arranger, producer and regular accompanist Reyer Zwart. Philippe is a frequent guest on radio and television programmes, where he champions the French chanson. Over the years, Philippe has recorded 12 albums and 2 DVDs.

Philippe Elan: “Singing with a symphony orchestra is a unique, different and exciting experience… and that was certainly the case with the Residentie Orkest. I was given the chance to choose the songs I wanted to sing and the talented Marijn van Prooijen and Max Knigge wrote exclusive arrangements for us. They both came to my house and we talked at length about my preferences in musical colours: a collaboration in which I had a very satisfying input... This way, I was able to tell my story in one concert… my story as a man and as a singer, and I am delighted that this recording can spread my story even further. I have always sung, mostly in French, my mother tongue, conscious that it was the best way, at least the most emotional and organic one for me to express myself as an artist. My mother tongue and my country France are intimately linked to my singing and I can honestly say that the title of this album Ma France is a genuine one. On this album I sing about my attachment to France, my heroes, my migration to Amsterdam, my prayers, my poems, my fears, my hopes and, of course, love.

Residentie Orkest The Hague (orchestra)More information
21-12-2019 Stretto
"On this CD Philippe Elan brings 11 particularly beautiful chansons, symphonic accompanied by the Residentie Orkest Den Haag."
03-12-2019 nederlands dagblad
"The power of the French songs."
08-11-2019 Mania
"Ma France is the complete story of the Frenchman as man and singer."
08-11-2019 Holland Media Combinatie
"More than ever, he is the storyteller who knows what lies in text and music: love."
01-11-2019 Trouw
"