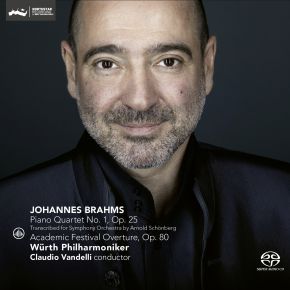 Arnold Schoenberg’s rarely recorded orchestration of the Piano Quartet in G minor (1861) demonstrates that Johannes Brahms was in no way the traditionalist that his adherents made him out to be.

Brahms increasingly became a model for Schoenberg during his later years. In 1931, in a letter to the American music critic Alfred Frankenstein, Schoenberg wrote that he had learned a lot from Brahms: “plasticity of design,” “systematics of compositional structure,” and “economy and yet: richness”.

In his essay “Brahms the Progressive” (1933/47), Schoenberg termed his model the protagonist of a forward-looking aesthetic, which despite its orientation by Classical and Romantic principles paved the way for the “developing variation” of New Music. Schoenberg wrote: “It is the purpose of this essay to prove that Brahms, the classicist, the academician, was a great innovator in the realm of musical language, that, in fact, he was a great progressive.” At the time this was a thoroughly provocative thesis since until then Brahms had been regarded as a classicist and a “conservative” upholder of the tradition.

Schoenberg substantiated his view of Brahms with his orchestration of the Piano Quartet in G minor Op. 25 in 1937. Schoenberg’s arrangement for full orchestra is both late romantic and modern.

“The one weeps; the other laughs”, this is how Brahms characterized his two overtures composed in the spa town of Bad Ischl in 1880. The first referred to the Tragic Overture; the second was the Academic Festival Overture heard on this CD. The composer wrote it for the bestowal of his honorary doctorate at the University of Breslau, where he conducted the premiere of the work on 4 January 1881. A potpourri in classical formal guise, the music brings together student songs that were familiar at the time.

You can buy this CD by clicking on the Red button on the page “Add to cart” Afterwards you find on top the grey button 'Basket' where you can proceed your order.

How can i get this sacd?

Claudio Vandelli (conductor)More information
16-11-2020 Ritmo
"four stars - outstanding sound"
28-05-2020 Fanfare
"The quality of the playing is quite high, particularly in the solo winds."
01-04-2020 American Record Guide
"... curious about Schoenberg’s view, this is heartily recommended."
05-11-2019 HR audio
"A remarkable debut, presented with the best possible sound engineering, recorded in loco, by one of today's best recording specialists around. It puts this orchestra-in-the-making firmly on the map."