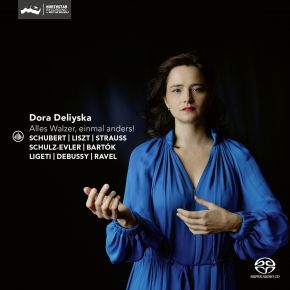 Dora Delyska: A waltz is a simple dance, a gentle movement. It has a clear structure and distinct rhythm.

In my project “Alles Walzer, einmal anders! “, I have tried to build up a complex program around the simplicity of the dance. All the pieces are connected to the waltz, by name, rhythm or a sound image. But each one has an individual structure and creates its own universe of emotions. The significant waltzing rhythm (¾ time) is the core, that unites all the compositions from beginning till the very last piece, which creates a clear musical line and a feeling of completeness.

The first association one has with a waltz and maybe the most famous one, is the Viennese one - moving gently, in elegant clothing, the dancing couple is driven by the inner pulsation of the waltz. The phrase “Alles Walzer” is being said just before the couple enters the dance floor and marks the beginning of the waltz (in Austria). It is the brief moment when expectation turns into action, when silence melts into the music.

The second part of the title “einmal anders” (once on a different way) refers to the different side of the waltz, that is represented on this CD by less known compositions, such as waltzes by Ligeti, Bartok and Debussy.

My CD has the goal to show a different perspective of the waltz and bring the audience to an unexpected musical journey, full of strong emotions and distinct rhythm.

Franz Liszt (composer)More information
24-07-2020 Fanfare
"Whether or not Deliyska succeeds in her attempt to build a convincing program, she and her Bösendorfer have given us a lovely hour."
20-04-2020 Music web International
"Deliyska's programme is extremely well balanced and remarkably varied... The sound is excellent."
28-02-2020 Pizzicato
"

In all pieces Deliyska convinces with a good feeling for rhythm and an excellent sound. An entertaining and technically excellent surround recording!

"
28-01-2020 Stretto
"Dora Deliyska has long established itself in the international piano scene. Her sensitive touch and lyrical interpretation art are cherished worldwide. Together with its technical perfection, this brings back a virtue that has long been underestimated, namely emotional competence. The result is a fascinating listening experience on a magnificent CD."