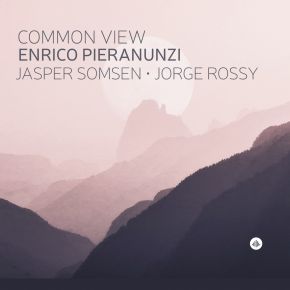 After more than 30 concerts and many excellent reviews about their first trio albums “Tales From The Unexpected” and "European Trio", the Italian pianist Enrico Pieranunzi and the Dutch double bassist Jasper Somsen recorded their third trio album with the Catalan drummer Jorge Rossy: “Common View”. The new album is an equal and refreshing collaboration featuring these three masters both as performing artists and composers. Three totally different lives, characters and backgrounds collide as one “Common View”. Release Challenge Records, produced by Jasper Somsen.

Enrico Pieranunzi has long been one of the best-known and appreciated personalities on the European jazz scene. Pianist, composer, arranger, he has recorded more than seventy CDs under his own name, ranging from solo piano to trio, and from duet to quintet. He has played in concert and in the studio with Chet Baker, Lee Konitz, Marc Johnson, Joey Baron, Paul Motian, Chris Potter and Charlie Haden, performing at all the most important international festivals, from Montreal to Copenhagen, from Berlin to Madrid. Pieranunzi's formative years embraced both classical and jazz piano, and the influence of Debussy is readily apparent in the lush romanticism at the heart of his music. Emerging in the early '70s, Pieranunzi's lyrical approach quickly brought him to the forefront of the European scene, and in 1984 he formed a trio with Marc Johnson and Joey baron, the first of several outstanding groups with American musicians. In 1989, 2003 and 2008 he was voted Musician of the Year in the Italian magazine Musica Jazz critic's poll and he was 1997 recipient of the Django d'Or Award for best European Jazz Musician. In the recent years Pieranunzi performed and recorded frequently in the United States.

His latest released two albums were recorded in just two days: “A New Episode In Life part I & II” –Jasper Somsen Trio feat. Jean-Michel Pilc & André Ceccarelli. Jasper performs worldwide, is a renowned studio producer, can be heard on 40 albums and was a frequently invited guest teacher at the conservatories in Amsterdam, Rotterdam, The Hague, Utrecht and Arnhem.

Jorge Rossy is internationally recognized as one of the most influential drummers of his generation. His sideman work includes over 80 recordings with renowned jazz musicians Brad Mehldau, Ethan Iverson, Kevin Hays, Albert Sanz, Mark Turner, Chris Cheek, Seamus Blake, Joshua Redman, Kurt Rosenwinkel and Steve Swallow, among many others. Jorge has also toured with some jazz greats including Charlie Haden, Wayne Shorter, Lee Konitz, Carla Bley, and Joe Lovano.
Besides his work as a drummer, Jorge has a distinctive voice on the vibes, marimba and piano, and a unique sound as a composer and bandleader. Since his first CD under his own name, Jorge Rossy Trio Wicca (Fresh Sound), recorded in 2006, Jorge has recorded 12 albums as a bandleader or co-leader, to critical acclaim from publications such as Jazz Times, Downbeat, Jazz Around, and All About Jazz.

Check the details on this new release. For some reason they list the recording as Released 1987 Also add a error in the performer name They mention a name Florian Zenker and omit Jasper Somsen Otherwise a beautiful recording

Jasper Somsen (featured)More information
01-09-2020 Jazzpodium
"... Cultivating language, omitting the unnecessary, letting silence have its say, all this gives the other person room for meaningful nuances. Two congenial partners stand equally at his side. On the one hand, there is the Dutch bassist Jasper Somsen with his preference for poetically floating tones, and on the other hand the almost inconspicuously acting drummer Jorge Rossy, who, curbing his Spanish temperament, forms filigree rhythmic figures... "
06-07-2020 Piano News
"... It is fascinating to experience how Pieranunzi presents themes, dissolves them slowly, expands them, and in doing so occasionally detaches himself from the jazz environment and gives in to his classical vein..."
20-04-2020 Jazzflits
"The open-mindedness with which they share the stage is also too belong on this album. The members of the trio are equally responsible for the artistic origins of the music."
02-03-2020 Musikansich
"... this is piano jazz at its finest, presented in an absolutely noble and sophisticated way. And this is not only thanks to the pianist, because it is the collaboration of the three musicians that represents the intensity in expression. At every moment they communicate with each other to create this collective sound..."
28-02-2020 Jazzbullitin
"High-quality jazz, with many musical-erudite references."
24-02-2020 Jazzradar
"A very successful artistic concert."
24-02-2020 Jazzradar
"Common View has become the product of a beautiful and refreshing collaboration; three top artists, both as composers and performers."
24-02-2020 Marlbank
"World class pianism and the art of the trio, exhibit one. It's been a while since something of this calibre has come along. A beautiful record."
15-02-2020 Rootstime
"Somsen proves once again that he belongs to the absolute top double bass players in the world, his warm tone, the subtle drum playing of Rossy and above all the sparkling and original keyboardplaying lion Pieranunzi makes listening to this CD a absolute pleasure."
07-02-2020 Mania
"These are three very different musicians who find each other in a beautifully balanced album in which everyone still makes his voice heard."
Jazzthing
"... At first glance, "Common View" sounds like it was written in New York. But when the signore intones the Somsen composition "Silk Threads" with his incomparable grace and passion, it sounds as touching as a work by Wolfgang Amadeus Mozart. A result of clever head and belly, southern sun and big city smog. "And proof of the high level at which European trios move," enthuses Enrico Pieranunzi. If anyone can judge that, then he can.
"