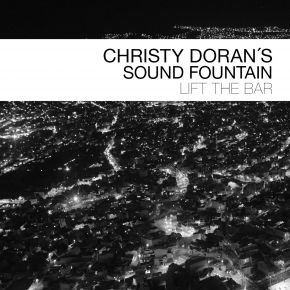 ... Wild stuff that’s not for everyone but is a new gold standard for those that like to boldly go where no one has gone before.  It’s on the corner of where prog jazz meets prog rock... Chris Spector, Midwest Record

Philadelphia’s Rave Musical Bar, where he played a few evenings, marked Coltrane’s time around 1957, when he found his sound through Monk and his ecstatic play began to reach its artistic heights in ever longer solos. After the cult quartet OM, named after an album title of Coltrane’s, Christy Doran pays homage to the titan once again. After stopped teaching, he deliberately raised the bar for his own work, while successfully dedicating himself to the music of another immortal star, Hendrix, since 1993: neither adulating nor imitating and with different line-ups.

The Irish-born citizen of Lucerne begins the title track almost in a similar way to Western music, but then it draws its characteristic lines immediately over the rocky groove of the wonderful Argentine bassist Franco Fontanarrosa and the precise driving beats of Lukas Mantel. Doran’s guitar alternates between irregular riffs and flat contrasts, between memorable melodies, repetitive patterns and trashy, noisy bulkiness at the end of the coziness. A few harmonies, dramaturgically set exactly in the right place, fire the sound and let us sense it all the more intensely and urgently. It is music of today, Doran’s very own, long-known and yet always a surprising sound, captivating and astonishing: Rock music of the hour, rich in nuances like jazz, played by three musicians with feeling and stupendous technique. It is the fourth Sound Fountain album, one of which was recorded live in Guetersloh in the series “European Jazz Legends” – to which Christy Doran has long belonged.

28-05-2020 Jazzzeitung
"... Doran's way of thinking and playing is more groove-oriented, more pressing and noticeably more physical. Together with his fantastic fellow musicians he creates a dense, highly complex music, which is blatantly stirring and can also inspire and take us on a deeper investigation..."
14-04-2020 Jazzenzo
"The power trio Christy Doran's Sound Fountain is just as adventurous and quirky. Since only bass, drums and guitar are the preferred instruments, there is a lot of space in the structure of the music."
05-04-2020 Rootstime
"It will not be “his or hers cup of tea” for everyone, but it is completely different from what people usually think of guitar jazz."