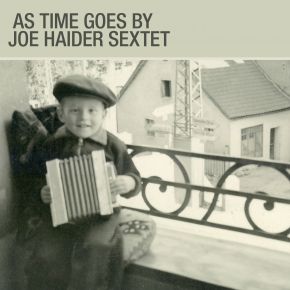 As Time Goes By

Joe Haider fills out a more than an exciting chapter in the book of German jazz history. The guy is certainly a milestone on the piano too. However, he is also one of the most overlooked and not listened to. Is he also an innovator? If you think that real innovation lies these days in resisting the oversized gripping arms of the spirit of the times uncompromisingly, then yes. And a role model? Musically in every respect. In other respects, however, the protagonist even has doubts himself, at least in terms of his past. But one thing is certain: Joe Haider is without a doubt an original and a creator of a certain style. He is one of the most important German jazz musicians of the postwar period.

“I have been on the road as a jazz pianist, composer, arranger and educator for more than 60 years, and an end is not yet in sight. I'm 84 now, but still fresh and alive!” A truly more than satisfactory balance sheet that Haider can draw in these turbulent times. Even if he admits: “But it sounds like the final minutes or overtime followed by a penalty shoot-out, to put it in soccer jargon. Still, I need to see how I can move on. I had the chance to meet many musicians and participate in many concerts as a pianist and band leader in my long career. I am extremely grateful for that!” Music determines the existence of the Darmstädt native more than anything else. It has always been a driving force, lifeblood, emotional sponge, companion, lover, excuse and articulation possibility all at the same time for him, always present, in good and bad days. Haider has concluded a pact for life with it, from the day when he decided to commit himself to jazz wholly with body and soul. If this American cultural import has a quite unique sound in German-speaking countries today, this is also due to someone like him.

As house pianist in the legendary jazz club "domicile" in Munich in the late 1960s and early 1970s, Joe met all the big names in international jazz as well as those who had brilliant ideas: Nathan Davis, Booker Ervin, Benny Bailey, Johnny Griffin, Philly Joe Jones, Joe Newman, Klaus Doldinger, Leo Wright, Peter Trunk, Dusko Goykovich, Pierre Favre, Klaus Weiss, Don Menza, Manfred Schoof, Mark Murphy and Hans Koller. Despite a career that more resembled a roller coaster and a market for recorded music, which increasingly pandered to the laws of commercial success, he repeatedly released records of downright admirable constancy and consistency. However, his contributions to the training of talented jazz musicians are almost to be assessed as more valuable. In 1974, Joe Haider founded the Munich Jazz School in Munich, and he directed the Swiss Jazz School in Bern from 1984 to 1995 in his adopted home of Switzerland. He gathered a myriad of talented musicians around him everywhere to teach them what he had learned from others.

The fact that his current CD “As Time Goes By” now has a nostalgic view on the one hand, but also an optimistic view on the other hand, almost at a 360-degree angle, springs from a lifelong creative reflex. In his own words, Haider is ringing in "my last phase in music" with his new sextet. He takes this step with a band consisting of three generations and consistently good friends: “First the octogenarians, Heinz von Hermann and Joe Haider, then Johannes Herrlich and Bert Joris, who are in their late fifties, early sixties, and finally the two “young guys” Raffaele Bossard and Dominic Egli, in their late thirties. They provide the necessary drive.”

Bert Joris composed the openers “Magic Box” and “Benoit”, and Haider called the latter his favorite piece. Heinz von Hermann composed the blues “A Blow For Joe”, Johannes Herrlich contributed “Hot Summer In Vienna” and the boss himself once again indulged in his passion for jazz waltzes in the form of “Only For You” and “District West”. The old warhorse “As Time Goes By” by Hermann Hupfeld and “But So Far” from the pen of the Swiss saxophonist, pianist and fellow traveler Andy Scherrer, who died in November 2019, round out this timeless beautiful, famously swinging and remarkably vital album.

“I was very pleased that these fabulous jazz musicians and soloists were available for this project,” a completely happy, proud and Joe Haider emphasized, who seems to have mellowed with age. And his fans can look forward to the result: a genuine Haider with all known angles, rough edges and many precious moments!

The past and future come together in the choice of pieces and in the instrumentation to form a beautiful present, which Haider himself describes as his 'musikalische Endphase'. The album 'As Time Goes By' is a wonderful culmination of this musical final phase.

"
10-09-2020 Fono Forum
"The most conclusive proof of the invigorating power of jazz is provided by Joe Haider. In Europe, the over eighty-year-old pianist, composer, arranger and music educator is one of the great personalities of this musical genre..."
01-09-2020 Jazzthetik
"... An all-round beautiful record and a wonderful example of jazz that is timeless in many ways."
14-08-2020 Jazzhalo
"On this album "As Time Goes By" Bert Joris plays an astonishing role, intense and pure, in blood form! And Joe Haider is grateful to Bert and all these top musicians who each make an impression interactively in the band and as a soloist. An excellent modern jazz album that exudes a zest for life."
05-08-2020 Süddeutsche Zeitung
"Masterful. Joe Haider is a formative figure in European jazz. The new album of the pianist, who is presented here with his grandiose Sextet is called "As Time Goes By"..."
01-08-2020 Rootstime
"

An album not to be sneezed at and it's not to be hoped that this would be the last phase for Haider, it sounds like he can last a long time, as well as his comrades!

"
31-07-2020 Na Dann
"... Mature age work or another very successful record of this learning teacher, everyone can decide for himself.

28-07-2020 Medienhaus Bauer
"... But whoever knows how to make music in a programme of mainly own compositions of the participants, no matter how relaxed and wonderfully swinging as here ..., should not stop there..."
28-07-2020 Musikansich
"... His music is as fresh and unspent as ever, and his colourful, age-appropriate band proves that jazz can be traditional and modern at the same time, even across generations..."