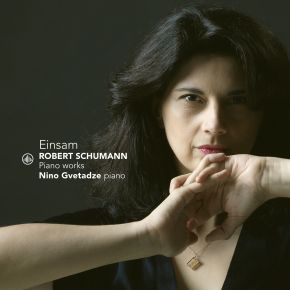 Robert Schumann’s piano music is invariably bound up with the dramatic events of his life. Schumann channelled both his love for Clara and his pianistic frustrations into his music, which was often composed with Clara in mind, both romantically and musically; she was an outstanding pianist and composer in her own right.

During the late 1830s Schumann wrote numerous works for the piano, many of which met with considerable success. The Arabeske in C, Op. 18 dates from early 1839. In a letter of 15 August Schumann described the piece, which was dedicated to Frau Majorin Friederike Serre auf Maxen, as “delicate – for ladies”, and it is true that it has a gently lyrical, dreamy quality. Yet there is more to the Arabeske than this modest description would suggest. Schumann had left Leipzig for Vienna in the autumn of 1838 after reaching an impasse in his relations with the Wiecks, and the keenness with which he felt the separation from Clara may be sensed in the Arabeske’s mixture of wistfulness and determination.

Of the piano music written by Schumann in the 1830s, just two collections include movement titles: the Phantasiestücke, Op. 12, and the Kinderszenen, Op. 15 of 1838. Schumann sketched 30 “cute little things” in early 1838, from which he chose 13 to create the Kinderszenen. The vivid movement titles were attached to each of the Kinderszenen after the music had been written, rather than inspiring the musical content. Yet the tender romanticism of these pieces – in Träumerei especially – suggests that Clara was never far from Schumann’s thoughts as he composed them.

Although Clara was a powerful source of inspiration for Robert, he was also profoundly influenced by both musical and literary sources, which helped him to make sense of his rich inner world. E.T.A. Hoffmann enabled Schumann to explore the different facets of his nature through the character of Johannes Kreisler, who appeared in several volumes including Hoffmann’s Fantasiestücke, one section of which is entitled ‘Kreisleriana’. Schumann strongly identified with Kapellmeister Kreisler: both men were devoted to the music of J.S. Bach, and both veered between extremities of mood, from ecstasy to despair. This multifaceted nature is encapsulated in the eight movements of Kreisleriana, Op. 16. Kreisler’s brusque mood-swings are represented through Schumann’s contrasts between dazzling virtuosity and lyrical tenderness, often anchored by the tonal contrast between the key areas of G minor and B-flat major. Schumann’s dual nature, previously communicated through Florestan and Eusebius, had found a new mouthpiece.
In contrast with the first decade of his career, which was almost entirely given over to piano music, Schumann did not write a great deal of solo piano music in the 1840s, producing just a handful of fugues and pieces for children. At the end of 1848 he began the Waldszenen (‘Forest Scenes’), a set of nine short piano pieces. ‘Vogel als Prophet’ is one of the more disturbing pieces in the set.

Schumann had returned from Vienna to Leipzig in April 1839. He drafted his Drei Romanzen, Op. 28, by 11 December. Clara was so enamoured of the set that she insisted on being their dedicatee: “As your bride you absolutely have to dedicate something more to me; and I know of nothing more tender than these three Romances, especially the middle one, which is the most beautiful love duet.”

Cyrill Scott performed by Nino Gvetadze! Cyril Scott was truly one of the more remarkable men of his generation. Far ahead of his time in many ways, in others he was inescapably a product of the Victorian age in which he grew up. As John Ireland his friend and exact contemporary wrote to Scott in 1949 “You were the first British composer to write music which was non-academic, free and individual ...

Robert Schumann (composer)More information
20-11-2020 Pianist
"Schumann in lockdown. According to Nino Gvetadze, we all have those two opposites in us. During the lockdown they became even more tangible."
26-10-2020 BBC Radio3
"It’s an absolutely lovely disc. It speaks clearly and personally to you, if you give it a listen. I found it very rewarding."
22-10-2020 Independent
"Her new CD, with its purpose – in her own words, to brighten an hour in this year of “loneliness, isolation, and silence” – is an unalloyed delight."
17-09-2020 Musique classique & Co
"What struck me the most, besides the accurate but personal characterization of the pieces, was hearing all the notes, all the polyphony in full clarity without losing the general line."
11-09-2020 Mania
"Her playing is captivating in the modest and natural phrasing. In addition, Gvetadze Schumann's tender moments or his musical outbursts manage to give the required intensity without any emphasis."
10-09-2020 De Volkskrant
"When Nino Gvetadze's fingers touch the keys of the grand piano and the opening bars of Robert Schumann's Arabesque sound, you forget what you were doing. Gvetadze's mesmerizing touch and round sound are enchanting."
04-09-2020 Opus Klassiek
"Important qualities in Schumann's piano oeuvre that are actually perfectly expressed in the sublime art of rendering of the Georgian Nino Gvetadze, who lives and works in our country."
31-08-2020 NRC
"Pianist Nino Gvetadze lets her listeners wander admiringly through the shadowy realm of Robert Schumann."
29-08-2020 Het Parool
"Sorceress on the 88 keys!"
21-08-2020 Stretto
"Nino Gvetadze, Einsam, Robert Schumann on the Challenge Classics label. Beautiful piano playing."