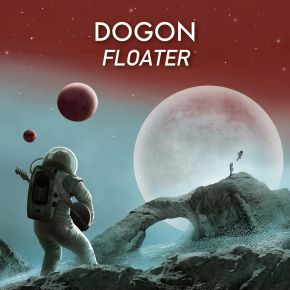 The best way to get moving is to have several variants. Sometimes boarding, then letting loose again, sometimes floating and walking alternately, sometimes driving or optionally crawling, sometimes motorized in a car, but you can also resort to the good old bike again. As different as all these variants may be, you can somehow get moving with everyone and ultimately reach your destination. In this respect, DogOn, the power trio of the bustling Zurich guitarist Eric Hunziker, can certainly be understood as a collection of modes and possibilities of movement. Or better: a vehicle to realize the diverse musical fantasies of the band line-up.
Hunziker, bassist Thomas Tavano and Tobias Hunziker on drums like it to be hearty and hefty. Sometimes it thunders rocking (boarding), sometimes it sounds jazzy (let loose), then there are filigree improvisations (walking) and mysterious sound collages (floating), eventually to return to funky grooves (car, preferably fast!) or even a pinch of dubbing (muscle power; or transferred to the musical life: unplugged). Without any inhibitions, filled with joy of playing, DogOn stakes its territory without stylistic blinders and puristic ulterior motives. Because Switzerland, or perhaps even Earth, has long become too small for this, they search for remote galaxies and planets, as the guitar-playing astronaut expresses on the cover of their second CD “Floater”.
The trio, which comes from the environment of the Lucerne Music Academy, navigates its spaceship confidently through stylistic spheres, steers it confidently through delicate meteorite showers and mysterious sound fog. The emerging sound might remind connoisseurs of Tribal Tech, Bunny Brunel or Wayne Krantz. But the guys don't really want to be perceived as a copy of famous role models in any phase, but have long since developed their own sound, with which they have been regarded as a hot secret tip since their debut album “Rotten Rainbow Rollercoaster”, especially in their Swiss homeland.


Of course, DogOn primarily lives from the distinctive guitar sound of its mastermind Eric Hunziker. As a composer, the string dervish is responsible for all ten tracks on “Floater”. In recent years, he has gained an impressive and prominent standing in renowned Swiss acts (Peter’s PlayStation, Lobith and Fearless Five) as a sideman, but also in his own projects (Neuromodulator and Swiss Indian Orchestra). His versatile, varied style has stood out again and again in this context. It proves to be an immense advantage that Hunziker not only masters “boarding” but also a number of other gaits in an almost dreamlike way. The founding of the adrenaline-rich combo stems from an encounter at the legendary Zurich Bazillus Club, where Eric Hunziker met Thomas Tavano and Tobias Hunziker in 2015. Since then, the band has completed a series of tours in Russia and Germany. It also had guest appearances at renowned festivals such as the Lithuanian “Mama Jazz”.

24-01-2021 Prog Land, Sao Paulo
"With a technically perfect and very unique instrumental, DogOn's Floater is essentially an instrumental track in which several positive adjectives could be enumerated."
23-01-2021 Prog Rock Scenes, Brazil
"An extremely beautiful jazz / funk / fusion Album. An impeccable recording and a wisdom in using both instruments and musical times very well. Particularly, it is one of the subgenres of Progressive Rock that I like the most and the band met the height."
22-01-2021 theItaliansoul.com
"
Floater" is a very interesting track, with its fusion vibes, as well as its funky groove!
"
15-01-2021 Midwest Record
"... This young, Swiss jazz power trio feels like they picked up right where Jaco left
off and turned things over to Stanley Clarke. Really killer fusion that doesn’t feel like it was done the
European way..."