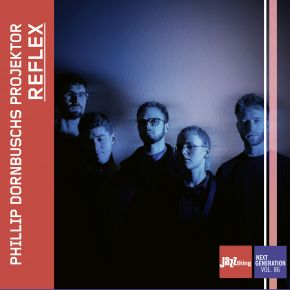 The Covid-19 crisis is not currently dealing with culture in a very careful way. For the second time, an emergency stop, which makes not a few of those affected even doubt their raison d'etre. The eternal discussion of relevance deals precisely with those who have classified themselves in the pigeonhole “Jazz”. On the other hand, Phillip Dornbusch's recipe is as simple as it is obvious: to make the world a little bit better. “I want to raise awareness of certain problems with my music,” the 26-year-old tenor saxophonist explained his chosen path. “For example, I wrote ‘Mourning’ when the ship “Sea Watch 3” was detained with many refugees onboard in Italy in July 2019. That moved me a lot, and the piece emerged from these feelings. When we play it live, I imagine the audience dealing with the story. And so I want to do my part to help things move in a different direction.”

Someone is really considering here why he is on stage, why it should be worth competing with thousands of well-trained saxophone players in an imaginary way, and what concepts could then be used to stand out from this anonymous mass. No, he does not want to reinvent the wheel, the 26-year-old said, who lives in Berlin-Schöneberg and comes from Stadthagen near Hanover. Coltrane remains unmatched, as does Lester Young, or one from the younger generation like Chris Speed. He has also reaped inspiration from awesome co-musicians such as Niels Klein, who has enriched the saxophone set in the Federal Youth Jazz Orchestra under its conductor Phillip Dornbusch since 2018, and Philipp Gropper, Pablo Held and Uli Kempendorff, but also from teachers such as Peter Weniger, Greg Cohen, Julia Hülsmann, Jörg Achim Keller, Marc Müllbauer, Gregoire Peters and Sebastian Gille. He got to know and appreciate all of them during his studies at the Jazzinstitut Berlin. They showed him paths to take, which he deliberately wanted to go alone.

When Dornbusch plays, he doesn't necessarily do it according to the book. His maxims are: experiment, try things out and avoid repetitions if possible. “I concern myself far too little with theory. I prefer composing from my moods.” Fewer notes. Just let your feeling and form on the day flow. As a result, the same piece can regularly sound different in key, rhythm and harmonic variations.

For this, open, flexible kindred spirits are needed, who also have an excellent command of their instrument. Therefore, it took much longer than just a few phone calls to put together “Projektor”, this young researcher quintet with the pianist Johanna Summer, the guitarist Johannes Mann, the bassist Roger Kintopf and the drummer Philip Dornbusch (who curiously is not related to the man on the tenor saxophone; the tiny difference lies in the “l” in the first name), which is now releasing a work with “Reflex” (Double Moon/inakustik) that also opens a new chapter for the successful Jazz thing Next Generation series. The current sequel in the series is actually an album like a reflex, perhaps the first one that doesn't start with finished concepts, but looks like a blank that everyone can bend, grind or knock into shape at will. “Boss” Dornbusch naturally composed with notes, wrote down certain parts quite precisely to consolidate the basic idea of the respective piece, but leaves at least as much open. In this context, the saxophonist often speaks of the “character of music” or of the “atmosphere”, encouraging his fellow musicians to play completely freely as well as unpredictable solos. Dornbusch thus proves to be the somewhat different architect. “I draw the plan for a house, the floor plan, the fireplace and certain rooms. The others can add the rest with all their creativity.” The musical renaissance of the Bauhaus style, so to speak – and hopefully to be admired live again starting from March. Otherwise, you would really miss something…

Beautiful and strong music. I live in Querétaro México, I was listening in a few days the news recordings of your label. Is amazing all this music.

Phillip Dornbusch (artist)More information
Phillip Dornbusch (composer)More information
Johanna Summer (featured)More information
Johannes Mann (featured)More information
Roger Kintopf (featured)More information
Philip Dornbusch (featured)More information
23-04-2021 Inmusic
"Next Generation Saxophone Jazz with fresh ideas, surprising twists and tremendous playing..."
13-02-2021 Rondo
"... By involving the listener in the process of creating his own world of thoughts, Dornbusch comes very close to him. A clever first release."
06-02-2021 Concerto, Austria
"... Between interlocking motifs, atmospherically wide-open arrangements and explorative interplay, "Reflex" remains exciting throughout..."
04-02-2021 Na Dann
"... In 7 self-composed titles the quintet of sax/clarinet, piano, guitar, bass and drums acts mostly free, in the sense of not pre-arranged, impresses with craftsmanship, emotional depth and spirited playing and letting out..."
31-01-2021 Musikansich
"... This jazz is not jazz for the cocktail bar, not jazz to listen to on the side, it doesn't really swing either, and despite the occasional impression that it could become academic or cerebral, this approach of an impression is quickly thrown overboard, because rather almost mystical moods shine through the scenery, and with a special kind of emotional expression..."
15-01-2021 Midwest Record
"... A sizzling debut that opens the ears to great promise."
Jazz-Fun
"jazz-fun.de says:
How many colors, fresh, surprising ideas, how many emotional nuances there are here! We can write a lot about the wealth of associations, references, ideas, but it's better to just let this music lead you. "Reflex" is a wonderful album and will remain a jewel of our collection for a long time."