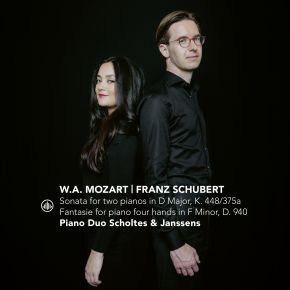 Scholtes & Janssens: We were just 18 and 19 years old when we first ventured to play Mozart's Sonata for two pianos. We'd only been playing together for a year at the time. Schubert's Fantasy in F followed shortly afterwards. Now, 17 years on, we're finally brave enough to record these two iconic works. Over recent years, these two works have taken on the role of critical teachers, sources of inspiration and motivation for us to keep on developing, as a duo certainly, but also and mainly as individual musicians. We've been challenged by legendary recordings made by the likes of Radu Lupu & Murray Perahia, Josef & Rosina Lhevinne, and father and son Neuhaus to discover our own sound, both in this music and elsewhere.
From the beginning seventeen years ago, we have been forced to face up to the fact that a good duo doesn't just happen when you put two good pianists together, and certainly not in Mozart or Schubert. Every note that's slightly misplaced, every chord that's not properly balanced can tarnish the performance. And every phrase when you don't breathe together. We gradually became more and more convinced that piano duo players have to be soloists, chamber musicians and an orchestra at the same time. As a duo, our aim is to have the freedom and virtuosity of a soloist, the ear and connectivity of a chamber musician and the tonal palette and nuanced subtlety of a symphony orchestra. 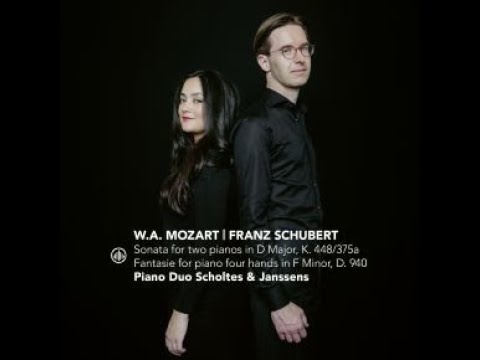 The coupling of Schubert's Fantasy in F minor with Mozart's Sonata for two pianos in D major immediately evokes the memory of the disographic milestone left by Radu Lupu and Murray Perahia (Sony, 1984). However, Lestari Scholtes and Gwylim Janssens deliver a personal and very convincing version of these two works.

"
01-07-2021 American Record Guide
"If you wish to explore compositions for two pianists this is the place to start. If you have 100 discs of 2-piano music, the playing here will jump into the best of them and is well worth getting."
01-04-2021 BBC Music Magazine
"They breathe together, agree on relative dynamics and tonal colour and understand the balance of the textures."
29-03-2021 Music web
"I have been pleasantly surprised by how soon I was sold on these performances by Piano Duo Scholtes & Janssens. These recordings can certainly live side by side in any collection, and I have a feeling the newer version might easily end up getting more airplay."