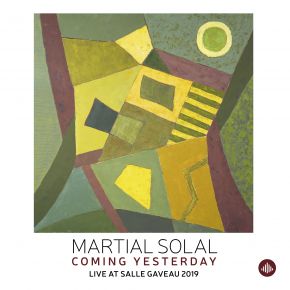 Coming Yesterday is the recording of what turns out to be Martial's last concert, he decided to stop playing piano after that show:

Martial Solal
"When I walked onto the stage on January 23, 2019, I did not yet know that I would decide not to play piano anymore after this concert, more than seventy years after my debut. To maintain a certain level, this instrument requires your daily attention; it requires delicacy, brutality, and especially energy. I have lived with these demands all my life, with the joy of seeing the progress, the technical and musical advances, the rhythmic and harmonic enrichments that we acquire over time. Of course, everything goes very fast at first. As long as you are gifted, if you spend a little time on it, if you listen to what was done before you, if you choose a path, everything may seem easy. Progress is rapid, illusions are immense, and then walls arise, walls that you want to reach and overcome. Seventy years to achieve this is a minimum... When energy is no longer available, it is better to stop.

I had the impression on January 23 of having reached the beginning of a path that I would have liked to continue, after so many years of improvisation, of creation, based on what are called standards, which I call pretexts, challenges, essay topics that you can develop in a thousand and one ways according to the evolutions that arise in your mind or in your circle of musicians. The standards have gone out of fashion, replaced by other themes that most of the time may not have the qualities to become standards, the so-called “originals”. All musicians considered themselves composers, free jazz burst onto the scene and swept away old themes, eliminating the difficult rules of stability of tempo, harmony and melody. Some standards have survived, and those you will discover can be described as indestructible. They are always only pretexts for expressing ideas, but with relaxed rules, the rubato being entitled to be cited as well as accelerations, atonality or the absence of a continuous tempo.

That is what I was thinking on January 23. Part of this concert seems to reflect my knowledge to this date. For me, jazz remains that of the twentieth century, the one that saw the birth of New Orleans, middle jazz, be-bop, and free jazz. The first three of these jazz eras were built on ternary rhythms. Charlie Parker may have been the first to use sixteenth notes on a medium tempo, abolishing the necessity of this permanent balancing called swing that has disappeared in this form with the emergence of binary rhythms and phrasings. This style of rhythm no longer corresponds to what I considered essential. I preferred a greater freedom, playing on the melting of keys, rhythms, duration, style, rather than on the forced slavery of the “new” ones. Great freedom requires a lot of work. I’ve done my share. I want to thank those who helped me, who helped me progress thanks to their encouragement or criticism, to those who were kind enough to play alongside me, for me, who often played my compositions for years. Too bad for all those who have missed out what I have tried to offer them. Progress is a very selfish happiness. I feel as if I have sown a blade of grass during this concert, showing a direction that I would like to see continue. In some places, this grass has already grown enough to be considered a musical testament… improvised''