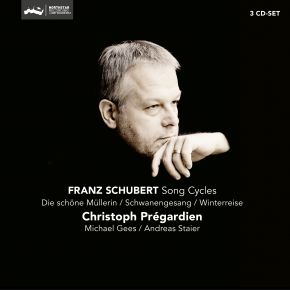 Is this an hommage to Schubert? Or just to a leading Lieder tenor of our time? Probably this box is both and it represents a clear reference for anyone who is a seasoned Lieder lover or a neophyte wanting to approach this genre.

I don’t say anything new when I state that the three Schubert’s Lieder cycles are the the pinnacle in the history of the art song. Not by chance any serious male singer wants to record at least one of these masterpieces.

Christoph Prégardien has been through the last two decades one of the most important and interesting voices confronting this engaging repertoire. He has taken an innovative approach in the hystory of interpretation, a way of singing that is linked to his consolidated experience as a Baroque tenor.

The three discs originally issued met with the unanimous acclaim from critics and consumers. They immediately turned up to be reference versions of each cycle.

So, this box comes as the discographic crowning achievement of Prégardien’s career and it is easy to predict it will be the reference version of one of human history highest musical moments: Schubert’s most complex and most beloved output in the Lieder medium.

About ‘Die Schwanengesang’: ‘While it is absurd to speak of an outright “winner” in such a crowded field, Prégardien and the ever-illuminating Staier join Schreier, Fischer-Dieskau and Brigitte Fassbneder on my roster of indispensable Schwanengesang recordings.’ (Gramophone)

About ‘Die Winterreise’: The Voice is in superb form, sensing out the underlying pulse and the minutest inflections of longing, delight, determination and soul-weariness within each lithe, live line of melody. (BBC Music Magazine). This is beautiful singing by a master of his craft, and Prégardien brings to the cycle his early-music-specialisation qualities of precise diction, tuning and articulation. (Early Music Review)

In the septemberissue of the Luxembourg magazine Pizzicato, the Supersonic Award goes to Christoph Prégardien and Andreas Staier for their exquisite interpretation of Schuberts Schwanengesang(CC 72302 on SACD). This cd on Challenge Classics was compared with other new releases of the same work by Ian Bostridge op EMI en Dietrich Henschel op Ambroisie. Prégardien and Staier came out best!'Nobody impresses more with his characterizations, the depth of  longing, the grief ...