The code is valid one time and valid for a 10 days after receiving the promotioncode. Your emailaddress will only be used by Challenge Records International and will not be given to 3rd party advertisers. If you have any questions please contact us.
TITEL CD is added to your cart.
1357722325 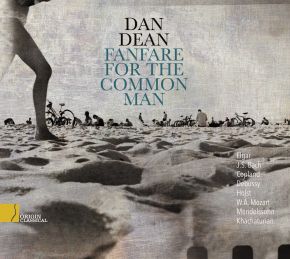 One has come to expect the unexpected from multi-talented artist Dan Dean. In the midst of a successful forty-year career as a bassist, composer, producer and recording engineer, Dean has in recent years delved into classical vocal works. What began as a project for electric bass and orchestra, 2017's Songs Without Words evolved into a multi-layered, highly ambitious choral work, with Dean himself supplying vocals on arrangements of pieces by Bach, Rimsky-Korsakov and Mussorgsky. Shortly after its release, he began arranging more classics that inspired him and returned to the studio for this second volume. The result is Fanfare for the Common Man, featuring much-loved works by Mozart, Mendelssohn, Elgar, and Debussy. From Bach's Baroque masterpiece, “Brandenburg Concerto #3 in G Major," to Holst's broadly cinematic "Mars: The Bringer of War," Dean masterfully renders timeless orchestrations with the rough hewn timbre of the violin family expressed through the resonance of the human voice. Both admirably and remarkably, he achieves the tonal character of violin, viola and cello, in terms of amplitude, spectral sound and emotive objective.