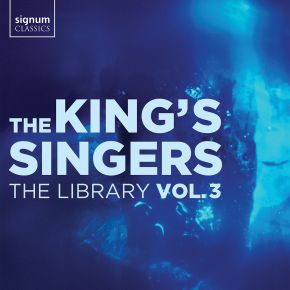 This is the third volume in the EP series ‘The Library’ – a series that explores both the history, and the new horizons, of The King’s Singers close-harmony repertoire. Close-harmony is the part of their work for which they are best known, and their library of thousands of arrangements is one they’re determined to explore, maintain and develop. The track-listing is designed to celebrate some old favourites from the library alongside brand new arrangements and adaptations, created especially for these recordings, which may perhaps become ‘old favourites’ of the future.

The King’s Singers were founded on 1 May 1968 by six choral scholars who had recently graduated from King’s College Cambridge. Their vocal line-up was (by chance) two countertenors, a tenor, two baritones and a bass, and the group has never wavered from this formation since.