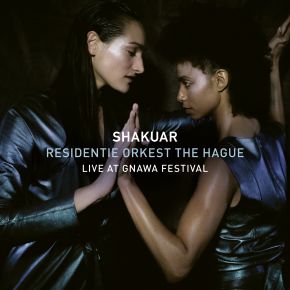 The project
The collaboration between Shakuar and the Residentie Orkest began in 2020. The world was shook by the COVID-19 pandemic, and performing artists were dealing with severe and unprecedented restrictions. The Residentie Orkest was unable to perform in their symphonic line-up, and ironically, as concerts got cancelled, a new space for collaboration was created.

During the warm days of the Dutch summer, COVID measures relaxed. It was the time for the Gnawa Festival organized by Multicultureel Jongeren Geluid and Zuiderstrandtheater, home to the Residentie Orkest. This festival, which took place in The Hague, is inspired by the famous Gnaoua World Music Festival in Essaouira, Morocco, an extraordinary seaside city where many important international artistic encounters have taken place. The Festival celebrates the Gnawa, a pseudo-ethnic group and musical style where West African traditional culture meets Moroccan Sufi Islam. Gnawa music is deeply spiritual, sacred in fact, and performed for healing purposes. Shakuar was invited to the Gnawa Festival and the idea for the collaboration with an ensemble of the orchestra was born.

Gijs Kramers was appointed as the musical arranger for this concert. He worked closely with Shakuar on how to translate and reinterpret their eclectic electronic music for an acoustic ensemble. They choose the line up with care: strings section, harp, French horn and percussion. Considering the characteristic role of deep low frequencies and manipulated sounds in the Shakuar sound, they teamed up with guest musicians Quincell Adolphin on electric bass/Moog and Jorrit Tamminga for live sound design.

Following numerous Zoom sessions, living room meetings, and rehearsals with the ensemble, it was time to bring all elements to the stage.

The concert
The concert took place on September 12, 2020 in De Nieuwe Kerk in the Hague. Built in 1649, the organic shaped décor and wooden structures of the pulpit stood in stark contrast with the obligatory 1,5m distance on stage. The orchestra was dressed in signature black, and Shakuar was dressed in black/silver leather garments by Dutch designer Vanderwilt who blended artificial and organic layers symbolizing the union of tradition and futurism. A historic place of worship transformed into the scenery for a contemporary musical ritual grounded in intimacy despite the physical borders.

The concert was performed twice. This album contains the recording of the very first show. With an audience of 100, the night was sold out.

We are grateful that this special moment has been captured for posterity during such a challenging and historic time. May it offer a moment of relief and joy for listeners around the world.