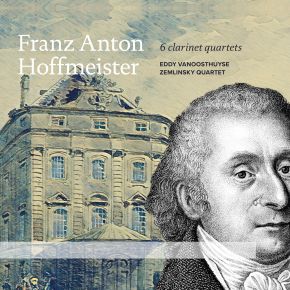 Hoffmeister’s oeuvre is quite an extensive catalogue with a remarkable number of works for flute. Several flute concertos and numerous chamber line-ups in which the flute predominates, are at the forefront. Since the flute was very popular at the time, not only the composer but also the publisher in Hoffmeister prospered. The quality of his music was high, and Hoffmeister became one of the best-known composers of his time. With nine operas, all performed scenically in the prominent Viennese theatres, he did better than many others. Schubert, for instance, could never attend a performance of one of his own operas during his lifetime.

These 6 quartets are among the most frequently played works in Hoffmeister’s rich oeuvre. It is exciting to notice that more and more prominent musicians, conductors and ensembles are rediscovering Hoffmeister’s work. This renewed interest is the best proof that quality will always prevail.

The rediscovery of the six clarinet quartets’ first edition by Eddy Vanoosthuyse brought the three temporarily lost quartets back into their
initial series of six quartets how Franz Anton Hoffmeister put them together. Also the foreseen release of both volumes scores with three quartets each as it had been edited by Ignace Pleyel is epoch making and it is certainly an important contribution for the completion of Hoffmeister’s work list to perform. Therefore, this complete recording of all six clarinet quartets is highly unique.

Making recordings with top musicians is no mean feat in times of Corona, but Eddy Vanoosthuyse did not have to go on any complicated journey: the six quartets were recorded in the Chamber Music Hall of the Concertgebouw in Bruges. For the Zemlinsky Quartet, which tours the world without any worry whatsoever in normal times, the situation was de- cidedly different. Checks, repeated tests in Prague and Brussels, and the utmost caution on every trip were mandatory. In spite of these setbacks, however, the five musicians were gung-ho, and presented themselves in optimal form at their stands. They were looking very much forward to tackling the Hoffmeister quartets: the enthusiasm to cooperate in a full-blown pandemic, and to take on this adventure together in order to achieve a perfect interpretation, was immense.