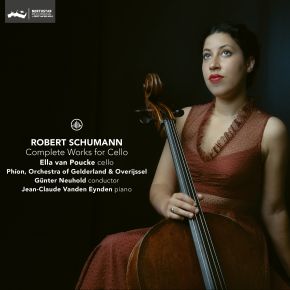 Ella van Poucke. Winner of the prestigious Premio Chigiana 2017 and recently awarded the Grachtenfestival Prize, the 27 year old Dutch cellist belongs to the top rank of today's generation of cellists.

She is the first prize winner of the International Isang Yun cello competition 2015, the Leopoldinum Award 2015, Prix Nicolas Firmenich 2013, Elisabeth Everts Award 2014, Prix Academie Maurice Ravel 2012, Dutch Musician of the Year 2012, first prize winner of the 2008 Princess Christina Competition and recipient of the special prize in “recognition of an outstanding performance at the Grand Prix Emanuel Feuermann 2014.

Schumann composed his Cello Concerto in about two weeks during November 1850. Before Schumann, few major composers had written cello concertos. Schumann avoids technical display for its own sake, allowing his characteristic poetic expression, intimacy and fantasy to prevail.

Schumann originally scored the Fantasiestücke Opus 73 (1849) for clarinet and piano but simultaneously provided alternative arrangements for violin or cello. In his choice of clarinet Schumann was typically innovative. The three pieces are melodically interrelated, creating a unity underlined by the absence of breaks between them.

Schumann's Adagio and Allegro in A flat major, Opus 70 dates from a week after the Fantasiestucke Opus 73. He originally intended his Opus 70 for the new valve horn, though he named cello, violin or viola as alternative instruments. The piece is fully characteristic of Schumann's Romantic spirit. The expansive and dreamily romantic Adagio gives way to an Allegro with a leaping, joyful main theme.

Just as Schumann had wanted “popular elements” to prevail in his Rhenish Symphony (1850), the Fünf stücke im Volkston (1849) are correspondingly simple, tuneful and accessible. Nevertheless Schumann's creative imagination and wide expressive range are no less apparent.

Van Pouck plays beautifully. In the Finale, van Pouck and company are exciting. The recorded sound is excellent. In the chamber pieces, the balance between the instruments is very fine and van Pouck’s cello exhibits a well-rounded sonority with a close-in perspective. If you are looking for the “complete” Schumann works for cello, this is a good choice.

"
01-02-2022 Diapason
"
Freedom mixed with tenderness, transparency, the most evolved and refined classicism of Ella Van Poucke is nevertheless worth the detour.
"
01-02-2022 Classic Voice
"

This is an impressive debut album from a soloist whose performances I look forward to hearing more of in the future.

She has emerged thriumphant in an impresive list of competitions

She conjures a beautiful, song-rich, honey-like tone from her instrument, which is sweet and bitter at the same time, striking the composer's tormented romantic personality at the heart.

It suits her perfectly: Schumann's enchanting fantasy world, the romantic but light touch, the cantabile playing and, somewhat to my surprise, she received convincing support from the Phion in the Cello Concerto [...] No wonder that the conclusion can only be that it has become a wonderful album...

"
29-09-2021 Sonograma
"Ella van Poucke offers with great generosity the pure and tight lyricism of the German composer."
22-09-2021 NRC
"In the Fantasiestücke, Op. 73 and the delightful 5 Stücke im Volkston, Op. 102 they explore diverse atmospheres and moods with apparent playful ease and without unnecessary frills. This is music to listen to carefully, because it veils its great depth with modesty – like the slow second piece of opus 102: fairytale beauty that takes your breath away."