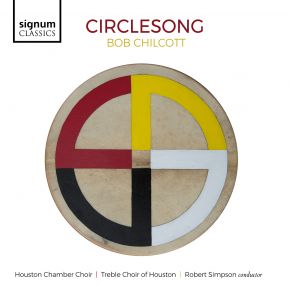 A work filled with ambition, Circlesong is a musical portrayal of the human life cycle as captured in the indigenous poetry of North America. Based on poetry from the Chinook, Comanche, Dakota, Eskimo, Iroquois, Kwakiutl, Navajo, Ojibwa, Pueblo, Seminole, Sioux, and Yaqui traditions, the thirteen movements, in seven parts, mark the different stages of life, from birth and childhood to adulthaood, middle age and death. With energetic percussion accompaniment, climactic moments for tutti choir, tender unaccompanied passages and solo song, Circlesong is a work of impressive drama, variety, and depth, peformed here by the Grammy® Award winning Houston Chamber Choir under Robert Simpson.

Founded in 1995 by Artistic Director Robert Simpson, the Houston Chamber Choir received the 2019 Grammy® Award for Best Choral Performance for its recording of the complete works of Maurice Duruflé (also available from Signum). Other honours include Chorus America’s Margaret Hillis Award for Choral Excellence and the American Prize, Professional Choir Division. Dubbed by Jamie Bernstein as“the choral equivalent of the Harlem Globetrotters” the Houston Chamber Choir is as comfortable singing jazz with Christian McBride and Dave Brubeck as performing Morton Feldman’s Rothko Chapel with violist Kim Kashkashian, and Mass Observation by Tarik O’Regan.