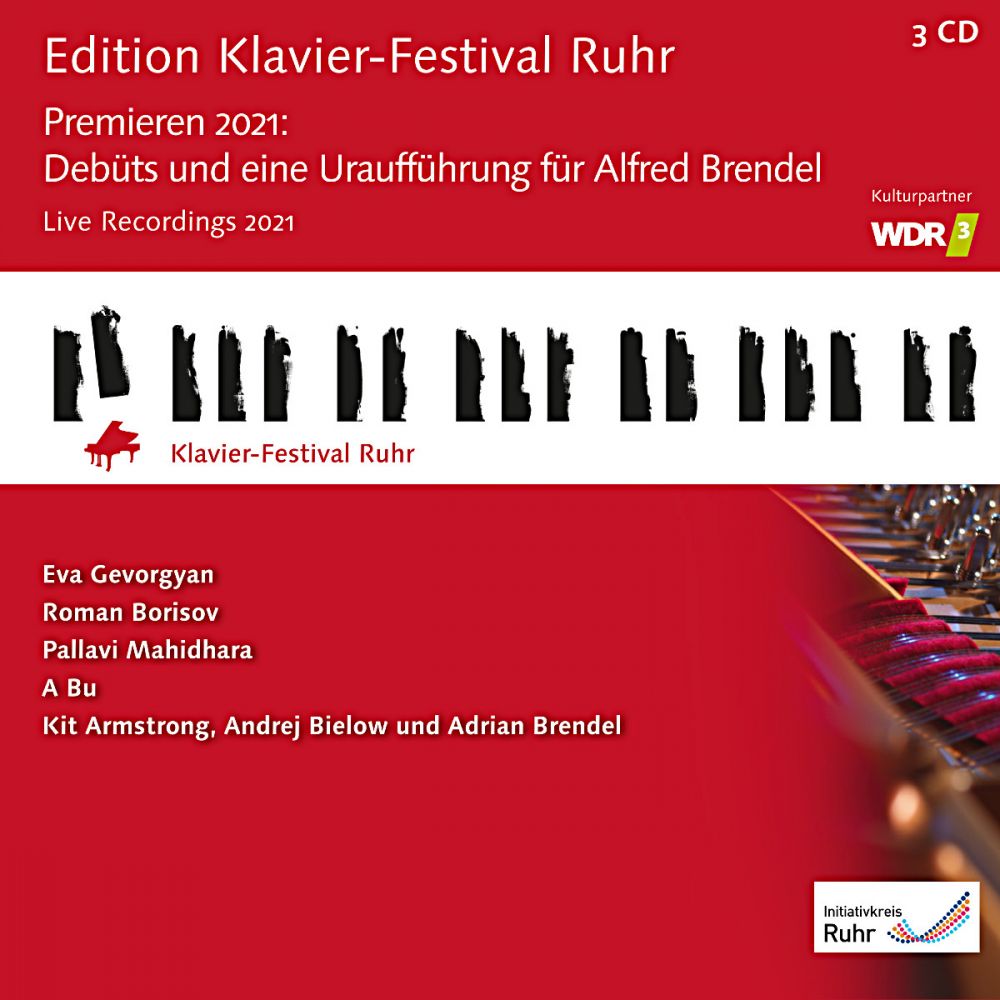 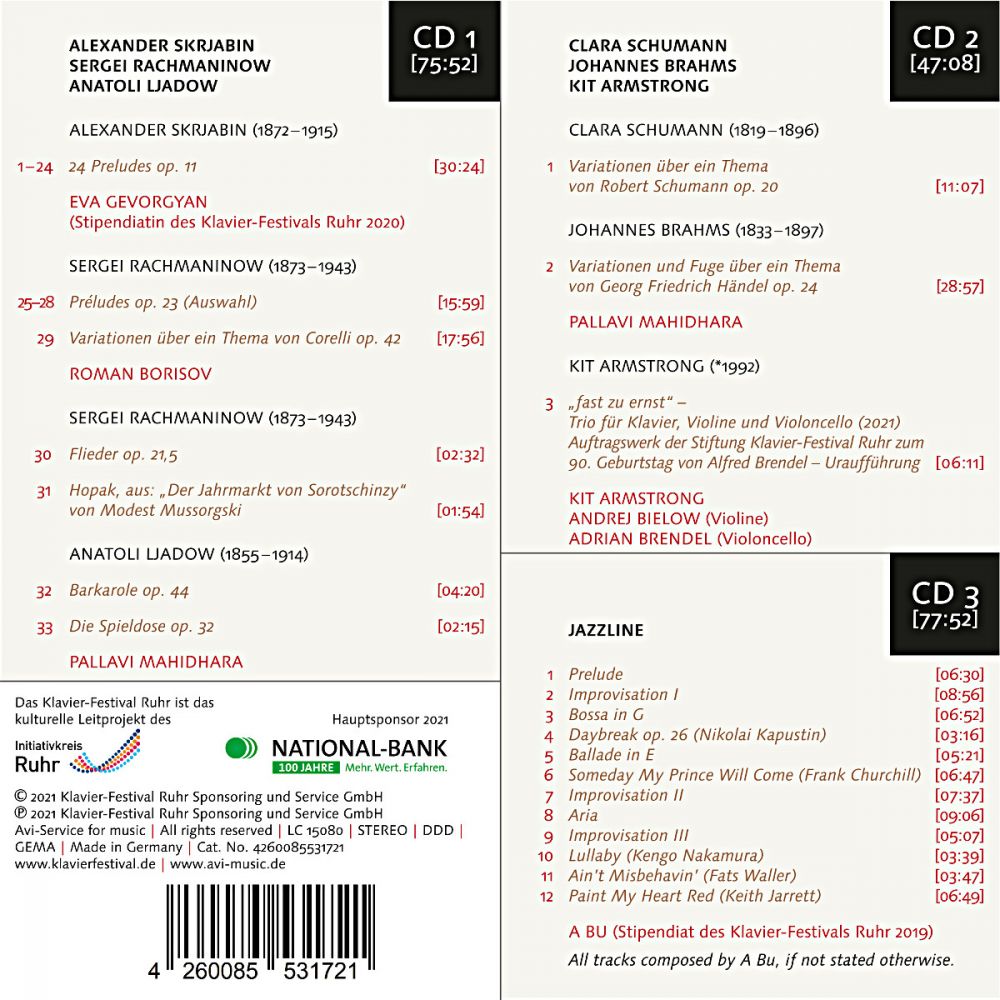 2021: Debuts and a Premiere for Alfred Brendel

Also the concert season 2021 was suffering under the pandemic restrictions. Again and again the festival management tried, with great help of their very flexible agenda, to fix new dates. And that made it possible to record some of the evenings, programmed in the Vol. 40.

The classical orientated program made it on 2 CDs incl. a world premiere from Kit Armstrong (for Alfred Brendel). Like in previous years the 3rd CD has been reserved for a Jazzline performance, executed and composed by A Bu who installed an energetic, exciting and diversified agenda with 12 tracks.

Eva Gevorgyan has actively participated in masterclasses imparted by Dmitri Bashkirov, Stanislav
Ioudenitch, Pavel Gililov, Piotr Paleczny, and Klaus Hellwig. She has concertized in Switzerland, Poland,
Russia, Italy, Germany, Armenia, and the UK, where she was awarded the Elena Cobb Star Prize at the
Royal Albert Hall in London.

Eva became the Discovery Winner at the ICMA (International Classical Music Awards) in Switzerland,
and was awarded the Junior Prize at the Eppan Junior Piano Academy in Italy. She currently receives a
scholarship from the International Academy of Music in Liechtenstein.

As laureate of the 2020 Ruhr Piano Festival Prize, Evgeny Kissin selected Eva Gevorgyan as scholarship
holder of the Festival, leading up to her début performance in the 2021 season.

Indian-American pianist Pallavi Mahidhara made her orchestral debut at the age of 10, performing at the
Ravinia Festival in Chicago. She received her Bachelor’s Degree from the Curtis Institute of Music in
Philadelphia, and her Master’s Degree at the Hochschule für Musik Hanns Eisler in Berlin. She studied
for several years with Dimitri Bashkirov at the Escuela Superior de Música Reina Sofía, where she is now
the Artistic Advisor and a Piano Pr ofessor for their Music & Culture Summer Camp in Madrid, Spain.

Pallavi is the Second Prize winner and Young Audience Award winner of the 69th Geneva International
Piano Competition, and of the VI International Prokofiev Competition in Saint Petersburg. She has won
the Steinway Advancement Prize in Germany and has received, on multiple occasions, the “Sobresaliente”
Award from the hands of Queen Sofía of Spain.

She has appeared in solo and orchestral concerts across five continents, performing at the Konzerthaus
in Berlin, the Auditorio Nacional in Madrid, the Kennedy Center in Washington, DC, and the Grand Hall
of the Dimitri Shostakovich Philharmonia in Saint Petersburg. Sir András Schiff selected her for his
concert series “Building Bridges,” a platform to support and promote young pianists.

Pallavi has
performed at important festivals such as Marlboro Music and Verbier Festival. Pallavi’s musical projects
have covered an extensive range, from standard Classical works to music of contemporary and living
composers, to fusion and crossover projects. She has collaborated with drummer Questlove of “The
Roots” and international singer/songwriter Keren Ann for a genre-defying concert, fusing the classical
world with hip hop, jazz, and folk-pop artists, at the Philadelphia International Festival of the Arts.

She
gave performances of Steve Reich’s Double Sextet with the multi-Grammy-Award-winning ensemble,
“eighth blackbird.” She has premiered a large piano work, titled “Fantasia and Fugue in C,” by one of
India’s leading film composers, Vanraj Bhatia.
Pallavi Mahidhara gave her début performance at the Ruhr Piano F estival in 2021.

Roman Borisov was born in 2002. Since 2010 he has studied at the Novosibirsk Conservatoire Music
College in the class of legendary piano professor Mary Lebenzon. He already makes regular appearances
throughout Russia, having performed at the Novosibirsk Philharmonic, the Chamber Hall of the Moscow
Philharmonic, the Concert Hall of the Jarosław Philharmonic (Poland), and the Kazakhstan Central
Concert Hall (Astana) with such orchestras as the National Philharmonic Orchestra of Russia, the
Novosibirsk Academic Symphony Orchestra, and the Astana Symphony Orchestra. He has taken part in
the International ArsLonga Festival in Moscow, the Piano-en-Valois Festival (France), and the Trans-
Siberian Art Festival (Novosibirsk).

Borisov has also frequently participated in the music projects of the Vladimir Spivakov Foundation, and
is increasingly attracting notice in western Europe; thus, for instance, he was one of the academy
participants at Verbier Festival in 2019. He gave his début performance at the Ruhr Piano Festival in 2021.

KIT ARMSTRONG piano / composer
Ever since Kit Armstrong set foot on the stages of international venues, he has never ceased to amaze
classical music audiences. Hardly any other young artist is well-versed in so many areas, with such a
universal upbringing. Described by the New York Times as a “brilliant pianist” who combines “musical
maturity and youthful daring in his exceptional playing,” Kit Armstrong has developed a unique artistic
approach, naturally combining a profound, intense study of music with other arts, the natural sciences,
and mathematics. His repertoire ranges from the dawn of keyboard music in the 16th century with the
English Virginalist School up to the music of our time.

An enthusiastic chamber music recitalist, Kit
Armstrong has developed close artistic partnerships with other leading instrumental and vocal artists.
Together with Renaud Capuçon he presented the complete Mozart violin sonatas at the Salzburg
Mozartwoche Festival and at Berlin’s Boulez Hall. With Christiane Karg, Julian Prégardien, and Benjamin
Appl he has performed important Lied repertoire. Edition Peters publishes his compositions.
Commissioners include the Leipzig Gewandhaus and the Musikkollegium Winterthur.
Born in 1992 in Los Angeles, Armstrong studied at the Curtis Institute of Music and at the Royal Academy
of Music in London. At 7, he started studying composition at Chapman University and physics at California
State University, later also chemistry and mathematics at the University of Pennsylvania and mathematics
at the Imperial College of London. He earned a master’s degree in pure mathematics at the University of
Paris VI.

Alfred Brendel, who has guided Armstrong as teacher and mentor since 2005, ascribes to him “an
understanding of the great piano works that combines freshness and subtlety, emotion and intellect”.
Their relationship was captured in the film Set the Piano Stool on Fir e by Mark Kidel.
In 2021, Kit Armstrong performed at the Ruhr Piano F estival for the 12th time.