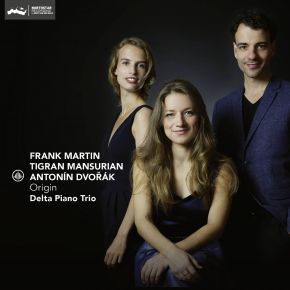 Quite often, a work becomes a journey of discovery towards a certain origin, translated into sound. Martin, Mansurian and Dvořák composed three such colourful works for piano trio – voyages of discovery taken here by the Delta Piano Trio through scintillating sound worlds.

When an Irish-American benefactor asked him to write a work based on Irish folk songs, Martin grasped this as an exquisite opportunity to combine two of the quests occupying him at the time – music from distant cultures and rhythm. his Trio sur des mélodies populaires irlandaises (1925) is a complex, mature and multi-layered score. The Armenian composer Tigran Mansurian (b. 1939) gives the term a deeper meaning with the idea behind his 5 Bagatelles (1985): the smallest things can have the greatest significance in life. Each bagatelle sounds like a moment when truth opens up; crystal clear while at the same time beyond our comprehension. Like many artists of the Romantic era, Czech composer Antonín Dvořák (1841-1904) let his music flourish from his deepest roots, his origins. His unique style represents a melting-pot of all sorts of characteristic elements of music and dance from his beloved Bohemia with the classical idiom. An example is the famous Piano Trio no. 4 (1891), based on the 'dumky', epic folk ballads depicting a tragic historic event. In much the same way that Martin, Mansurian and Dvořák each made their own voyages of discovery in their compositions, the Delta Piano Trio has also reached the heart of these three works.