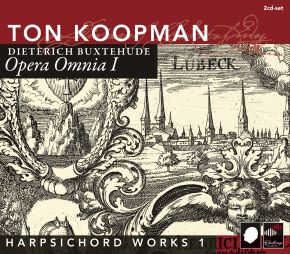 Opera Omnia I - Harpsichord Works I

Ton Koopman: harpsichord (by Willem Kroesbergen - Flemish, after Ruckers and Italian, after Giusti) Dieterich Buxtehude (Dietrich, Diderich) was a German-Danish organist and a highly regarded composer of the baroque period. His organ works comprise a central part of the standard organ repertoire and are frequently performed at recitals and church services. He wrote in a wide variety of vocal and instrumental idioms, and his style strongly influenced many composers, including Johann Sebastian Bach. Organist at the Marienkirche in Lübeck for most of his life, Buxtehude is considered today to be the leading German composer in the time between Schütz and Bach. In this first volume (double-cd) of the Opera Omnia of Dieterich Buxtehude, Ton Koopman touches the composers harpsichord works as being a part of his impressive output that is still, alas, insufficiently known. In total his harpsichord-compositions will comprise three cd's. The Suites offer many opportunities forimprovisation, or 'diminutions', as they are called in the 17th century. Koopman employs a heavy dose of Italian esprit. Ton Koopman (1944) studied organ (Simon C. Jansen), harpsichord (Gustav Leonhardt) and musicology in Amsterdam and was awarded the Prix d'Excellence for both instruments. As an organist he has performed on the most prestigious historical instruments of Europe, and as a harpsichord player and conductor of his Amsterdam Baroque Orchestra (founded 1979) & Choir (1993) he has been a regular guest at venues which include the Concertgebouw in Amsterdam, the Theatre des Champs-Elysées in Paris, the Philharmonie in Munich, the Alte Oper in Frankfurt, the Lincoln Center in New York, and leading concert halls in Vienna, London, Berlin, Brussels, Sydney, Melbourne, Madrid, Rome, Salzburg, Tokyo and Osaka.

Ton Koopman edited the complete Handel Organ Concertos for Breitkopf & Härtel and will edit a number of Buxtehude works for Carus Verlag. He is presidentof the International Dieterich Buxtehude Society.

Dieterich Buxtehude (composer)More information
13-11-2014 Presto Classical
""But... for me, no composer at all is equal to Bach. Not even Mozart!""