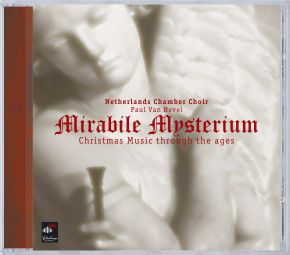 Through the ages, the Christmas story has served as an important source of musical inspiration. Since the early Middle Ages, elements of the Christmas story have been depicted musically in both liturgical and lay settings. Besides the Christmas carols, which usually relate to a particular episode of the Christmas story, there are, of course, the Nativity plays, which present a more concrete plot. Christmas music has always been closely interwoven with the musical traditions of the country in which it arose, more so than music associated with other Christian holidays, as Christmas has always been a time of celebration in which everyone – not only churchgoers, but also those who stayed behind in the village square and sang their songs – could take part. The boundary between sacred and secular is thus blurred in Christmas music.

On this CD recording, Christmas music from many eras can be heard. The more modern compositions hark back to Renaissance music, and the early medieval motets sound surprisingly contemporary. The music on this CD focuses on the Magi’s journey as they follow the star to Bethlehem. In the texts, the Three Kings are often held up as an example for listeners: we must also follow that star, and if we have no gold, frankincense or myrrh to give, we must give our hearts to the newborn Christ Child.

In Spain, Christmas was, and still is, a time of joyous celebration. In the sixteenth and seventeenth centuries, innumerable Christmas carols – or villancicos de navidad – were written in Spanish. These were also sung in church and were frequently danced to. It was the only time of year that songs set to Spanish lyrics were allowed in the church. From the beginning of the sixteenth century, the villancico constituted the most important form of song in Spain. It was originally a simple song comprising several stanzas set to a short, recurring melody that everyone could sing along with. Triple metre and dotted rhythm are quite characteristic of the Christmas villancico. This genre was well loved up through the eighteenth century in Spain and South America alike. In the four Spanish works presented on this CD recording, the development of the villancico de navidad can be heard clearly. The anonymous Señores el qu’es nascido is from the Spanish manuscript Cancionero de Uppsala. Swedish soldiers were ordered by Queen Christina of Sweden to steal it from the Spanish court library. The good men had no idea what exactly they had taken with them (naturally, they could not read music). The manuscript is still housed in the university library of Uppsala. This is a villancico in its purest form, comprising short stanzas and a simple, catchy melody. In Sebastian Alfonso’s Unidos tres reyes, the melody is much more elaborate. Here, the stanzas are performed in two different settings – one vocal, the other vocal and instrumental. Geronimo Luca’s Este Niño que es sol del aurora is also a typical Christmas villancico, in which the dotted rhythm is clearly evocative of the Child being rocked back and forth. In Francisco Losada’s A Penas nace este Niño, we hear how other compositional styles exerted ever more influence on the villancico. No longer is the melody so easy to sing along with, but the marked rhythm remains.

Balaam de quo vaticinans and Vincti presepio/Stelle presagio, both anonymous, were written in the Ars Antiqua style at the end of the thirteenth century. We can hear how quickly music in fourteenth-century France developed if we compare these works, which still have a rather simple rhythmic structure, with the motet Hodie puer nascitur (1390), also anonymous. This is an isorhythmic motet, whereby various texts are sung simultaneously in different rhythms. One of the texts is about man’s mortality, while the other is about the birth of Christ. Equally daring is the use of chromaticism in Jacobus Gallus’s motet Mirabile mysterium and Giaches de Wert’s Vox in Rama. Gallus’s use of chromaticism at the beginning of his motet is practically reminiscent of Carlo Gesualdo’s. At the words ‘mirabile mysterium’, we also hear a miraculous event in the music. De Wert lets the voice from Rama be heard from the depths of the choir with distinct ascending lines. Jacobus Clemens non Papa’s motet Ab oriente is a short song of rejoicing in which many ascending motives can also be heard.

The nineteenth century saw something of a renewed interest in older church music. Robert Schumann, for instance, led a small choir that performed Renaissance music. Other composers in Germany began writing a cappella choral music again. A perfect example of this fascination is Peter Cornelius’s song Drei Kön’ge wandern aus Morgenland, which he composed as a countermelody to the chorale Wie schön leuchtet der Morgenstern, thereby making a direct reference to Pretorius and Bach, who used that chorale several times. The anonymous four-voice chorale Quae stella sole pulchrior is from a Parisian breviary of 1736. It is an evening hymn for Epiphany written in a somewhat naive style and based on a monophonic melody of medieval origin preserved in Directorium chori (1582).

In the twentieth century, early music served as an even greater source of inspiration for composers, especially in England. This is not that surprising, considering that, because of the English choral tradition in the church, the music of Byrd and Tallis, for instance, had never faded. One can, in fact, speak of a truly continuous tradition. This is made all the more apparent by the performance here of Harold Darke’s In the bleak mid-winter, accompanied by Renaissance instruments. Christina Rossetti wrote the poem In the bleak mid-winter in 1872 and entered it in a Christmas-poem contest held by a magazine. A number of composers have set the poem, Gustav Holst’s version being the most famous. This Christmas carol embodies the same general idea as Peter Cornelius’s song of the Three Kings – one of a typically romantic Christmas spirit. To an even greater extent than Darke’s work Bertram Luard-Selby’s A Voice From Ramah is based on English Renaissance polyphony. In this manner, Christmas music both old and new coalesces on this CD recording to form a single entity.
Marcel Bijlo, July 2004