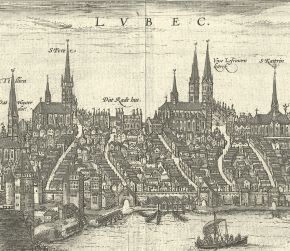 This recording contains some of the most mature, harmonically daring and most accomplished of Buxtehude's compositions, including BuxWV 139, 141, 146, 210 and 213. Since Buxtehude in his later organ works was oriented towards the innovations in harmonic temperament introduced by Andreas Werckmeister after 1680, the compositions on this CD were recorded on an organ tuned according to Werckmeister's system. Buxtehude himself was a theatrical personality, the church his theatre. To do his compositions justice we need a ÒmachoÓ playing style and virtuosity, but also emotion, fantasy, contrast, beautiful registers and a unique historical instrument. The splendid historic organ of Altenbruch is ideal for the later works of Buxtehude.

The splendid historic organ of Altenbruch, tuned according to a Werckmeister temperature (in which most of the fifths are pure but the thirds are less pure than in meantone temperament), is ideal for the later works of Buxtehude. There is much discussion as to whether Buxtehude’s organ works should be transposed or not. Organists working in a church with a meantone-tuned organ will certainly want to do that, but otherwise transposition is unnecessary. In 1683 the organs played by Buxtehude in the Marienkirche, Lübeck, were converted to a Werckmeister tuning. For Buxtehude’s works it is therefore always ideal to choose between organs: meantone for the early works and Werckmeister for the later. It is striking how accomplished the later works are, for example the Prelude in F sharp minor. In Buxtehude’s output we can see an enormous development in compositional skill. Remarkable aspects of his art include the freedom required by the stylus phantasticus and the use of rhetoric. Thanks to these, each performance of a Buxtehude work is bound to be different. The stylus phantasticus is a highly personal style, originating in Italy, and it requires the greatest possible creativity from the performer. Dieterich Buxtehude himself was a theatrical personality, the church his theatre. To do his compositions justice we need a “macho” playing style and virtuosity, but also emotion, fantasy, contrast, beautiful registers and a unique historical instrument.