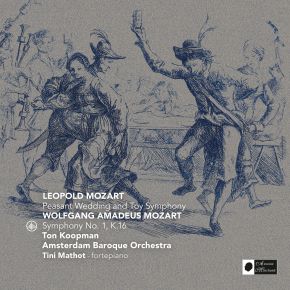 One side note, while Die Bauernhochzeit and Cassatio ex ("toy symphony") are considered to be works by Leopold Mozart by the creators of this album, others argue the "toy symphony" must have been composed by Joseph Haydn or Edmund Angerer. There is little consensus within the musicological debate.

Leopold's compositions are characterised by the simplicity. He also often uses unusual instruments to create different timbres in his compositions. In Die Bauernhochzeit, for example, you can hear a bagpipe and musicians are instructed to clap and cheer along during the performance.

The works of Wolfgang Amadeus Mozart on this album are his Symphony in E-flat, the Twelve Variations on ‘Ah, vous dirai-je maman’ and the fugue from his Gallimathias musicum. The latter was composed for the inaugeration of Willem V as the governor of the Dutch Republic. The Symphony in E-flat is Mozart's first symphony. This is a nicely composed miniature work, even though it is an experiment in a new genre.

Amsterdam Baroque Orchestra & Choir (orchestra)More information
20-12-2017 Kerk & Leven
"Mozart was able to improvise tremendously and continued to play, even for hours, after concerts. Challenge Records released a new edition of such works, which Ton Koopman recorded with the Amsterdam Baroque Orchestra and Tini Mathot on the keyboard about ten years ago."
10-10-2017 Klassiek Centraal
"Beautiful sound recording, musical composition perfectly matched with the Stein pianoforte from 1803, played by Tini Mathot."
28-09-2017 Kerk & Leven
"Light, entertaining music"
04-07-2017 Pizzicato
"The carefully prepared, firm interpretations are pleasing and fit the nice, entertaining program"
01-06-2017 AVROTROS
"CD of the week: Two Mozarts by the Amsterdam Baroque Orchestra"