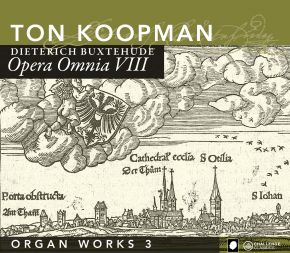 Dieterich Buxtehude’s organ works are his most significant contribution to the history of music. They consist of a comprehensive corpus of just 90 compositions, of which more than half are chorale settings. However, these are mostly shorter than the preludes, toccatas and other freely conceived pieces, so these last represent a more substantial share of his entire output.

Five different types of pieces are included among the works collected in this CD, all representing distinct genres of improvisatory styles that make up the broad spectrum of the daily practice of organists in Lutheran Germany, whether designed as functional music for worship services, for presenting them in recitals, or for purposes of compositional study.

None of the original instruments played by Buxtehude as organist in Helsingborg, Helsingør, and Lübeck have survived. The Schnitger organ of Hamburg’s Jacobi Church of 1689-93 actually represents an instrument that Buxtehude would surely have known, for he travelled frequently to Lübeck’s sister city.