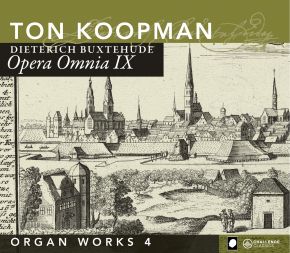 The beautiful village church in Basedow is home to a 17 th -century three-manual organ (as in Lüdingworth) in meantone
tuning. Many chorales and a few plenum pieces sound phenomenal on this colourful instrument, which was very nearly
demolished in the days of the GDR and, now fortunately restored, has its own individual sound.

Remarkably, the number of notated or- naments in the organ works of Dieterich Buxtehude is usually very small. But in
the chorale settings, most of which have been passed down to us by J.G. Walther in three collections, we see a great many ornaments. These are scorned by modern editors, who notate only a minimum of ornaments, which they ascribe to Walther. As they deem these ‘unauthentic’, they claim they are better omitted. In the Canzonetta, BuxWV 167, we see an example of a short work with many ornaments notated in the original source (in the hand of G. Lindemann, dated 5 March 1713) which we find in a relatively complete state in some modern editions. Far from complete, unfortunately, are the editions of the Prelude in A major, BuxWV 151. In addition to the chorales copied by Walther, these highly ornamented works give us an idea of the harpsichord-like playing of organists in the late 17 th  and early 18 th  centuries.

It would indeed be too facile to write these off as ‘unauthentic’. One organist’s ornamentation comes easier than that
of another; this was as true then as it is today. But beware: ornaments are part and parcel of the language that can enliven the rigid dynamics of the organ. A restored palace without the original decorations and embellishments looks
like a monument damaged by fire, one which lacks elegance. Unfortunately, organ music often suffers the same fate.
Ton Koopman