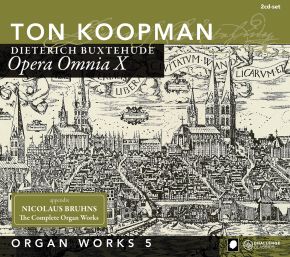 The Buxtehude Opera Omnia series is steadily progressing. It is with great pleasure that I present to you the final
part of Dieterich Buxtehude’s organ works. Now that the task of recording all the organ and harpsichord works has
been completed, the astounding quality of this music has become evident. Naturally, organists play Buxtehude’s works with relative frequency. However, only a dozen or so of his works are actually performed regularly. Undoubtedly,
the extreme discrepancies between the various editions are one of the main underlying reasons for this. Many questions arise: which Urtext is the real one? Are the sources of such poor quality, or are there flaws? Is it necessary to salvage the music? The indisputable fact is that the organ works of Lübeck’s greatest composer were by no mean preserved through the ages in the most ideal fashion. No less than a century and a half separate the earliest and the latest sources, there are no autographs, etc. The organist is thus compelled to undertake the performance of these works with a great deal of taste, know- ledge and courage. A creative composer requires a creative interpretation.
Bach and Mozart even survive being performed on a street organ, whereas Couperin and Buxtehude do not. There is great interpretative freedom in this ‘stylus phantasticus’; however, there are limits to what is possible. The incorrect reading of the foreword to Frescobaldi’s first book of Toccatas was once the reason behind the practice of beginning all the Preludes with an accelerando. In my view, the comparison drawn with madrigals in this same fore-word is of major significance, and can be taken to mean: each section of a Prelude and Toccata has its own tempo. A relationship between tempi no longer exists. The ‘tempo della mano’ has been replaced by ‘tempo dell’anima’. This is my most important conviction.
Ton Koopman