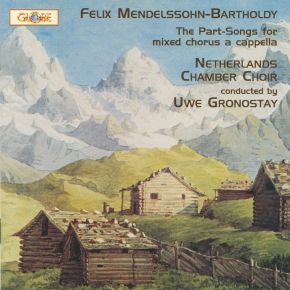 The complete Part-Songs for mixed chorus a cappella

The Netherlands Chamber Choir was founded by Felix de Nobel in 1937, and is a fully professional vocal ensemble consisting of 24 singers. Although it applies itself nowadays first of all to the repertory for either a cappella chorus or works with accompaniments by single instruments, it also collaborates regularly with renowned ensembles and orchestras such as the Schonberg Ensemble, the Royal Concertgebouw Orchestra, Frans Brüggen's Orchestra of the Eighteenth Century and Ton Koopmans' Amsterdam Baroque Orchestra.

The repertory of the Netherlands Chamber Choir spans almost the whole of Western music, ranging from the early Middle Ages to the late 20th century. Uwe Gronostay had been its artistic leader and chief conductor from 1987 to 1998.