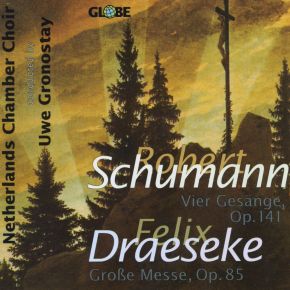 The new and eagerly awaited CD with the Netherlands Chamber Choir under its regular conductor Uwe Gronostay. Schumann's four Choral Songs for double choir, Op.141 are considered to be the best choral works the great German composer ever wrote. The Great Mass, Op. 85 by Felix Draeseke is a world premiere recording. German-born composer Draeseke was a contemporary of Liszt and Wagner, who both held him in the highest esteem possible. His music however was too advanced for the audience's taste of those days, but nowadays he is recognised as the great genius he was. This Mass shows Draeseke as the great master of an a cappella style which is not to be found between Brahms and Reger.

In these performances the Netherlands Chamber Choir once again show why they are considered to be the leading international a cappella choir of our times!