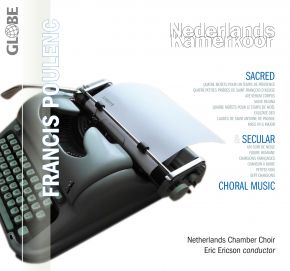 ... The Nederlands Kamerkoor directed by Eric Ericson is in remarkable form throughout both the sacred and secular works. They achieve a high degree of unison combined with a real sense of artistry. It would be hard to better these performances. Clearly Ericson had prepared the choir impeccably with consistent purity of tone and an impressive transparency of texture displaying this music at its finest. In the sacred works there's a satisfying degree of reverential expression and it is of such an elevated quality it feels almost mystical at times. This can be heard to glorious effect in the Quatre motets pour un temps de pénitence (Four Lenten Motets). Soprano Barbara Borden s glowing lament in the section Tristis est anima mea (My soul is exceedingly sad) feels divinely reverential. The Figure humaine (The face of man) a hymn to freedom for Occupied France during World War Two is the standout secular work. I especially enjoyed the forceful expressive fervour in the opening section De tous les printemps du monde (Of all the spring times of the world)and the drama in En chantant les servantes s'élancent (As they sing, see the maids rushing forward) is especially notable. Toi ma patiente (Thou patient one) has a dark melancholy and Le jour métonne et la nuit me fait peur (Surprised by day and by night made afraid) is given a warmly sympathetic performance. The Figure humaine is a truly remarkable work. I still recall a powerfully affecting performance given in September 2009 at the Berlin Konzerthaus by the combined Latvijas Radio koris and the Valsts Akad miskais koris Latvija directed by Sigvards Klava Both of these reissued discs on the Globe label have fairly warm and well detailed sound. The balance and perspective on each disc is excellent too. I can only describe the booklet notes as adequate; extra information about each work would have been welcome. Globe is to be congratulated for providing full texts with English translations. Throughout I have used the translations as given in the booklet. The music is extremely well served by this reissue. I would be extremely content if these were the only recordings I had of these marvellous Poulenc works such is their quality. --Michael Cookson - MusicWeb International