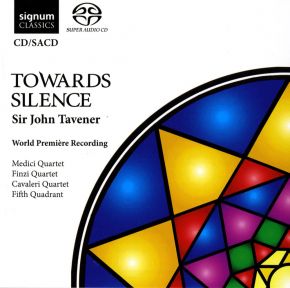 This premiere recording of John Tavener's Towards Silence, written for four string quartets and a large Tibetan bowl, explores the nature of consciousness and the process of dying. Tavener had long wanted to write the work and persuaded Professor Paul Robertson (leader of the Medici Quartet and Co-Founder of the Music Mind Spirit Trust) to perform it. However, shortly after the manuscript was completed both men became critically ill and close to death themselves.

By August 2008 Robertson had recovered sufficiently to resuscitate the project, which had now taken on a profound significance for himself and for Tavener. The members of the Medici Quartet immediately agreed to reform and identified young professional string quartets with whom to perform and to act as musical mentors.

Tavener's vision was for all four quartets to be positioned high up in the cathedral dome, invisible to the audience, and arranged in the shape of a cross, bringing the Christian, Bhuddist and Hindu religions together. This sense of space has been captured in the recording.

"The musical scheme is one of progressive etiolation. The chiming of the bowl marks the passing of time, as the music - thrummed pizzicatos, winding melodies, quietly sustained chords - steadily withdraws into itself, contracting into string chords. Eventually they cease, and all that's left is the sound of the bowl, now a sustained sound rather than chimes, and gradually fading, too. For some in the audience it might have been a great spiritual experience, hard to separate from Tavener's own condition." -   Andrew Clements, The Guardian (concert review)