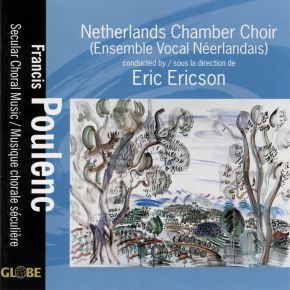 The successor and companion to our highly successful album with Francis Poulenc's Sacred Choral Music: the complete Secular Choral Music, once again with the illustrious Netherlands Chamber Choir conducted by Eric Ericson, recognised as one of the greatest choral conductors of the 20th century. Professor Ericson, as well as the Netherlands Chamber Choir, has always had a special affinity with Poulenc's choral works and nowhere can this be experienced better than on this album and its predecessor which was hailed by critics all over the world as one of the best choral albums ever. Need we say more?