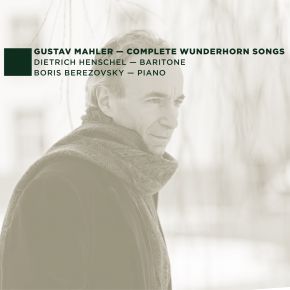 The performance of the complete Wunderhorn Lieder requires an artist who understands the musical and vocal import of these songs, but also their dramatic content. What is needed, therefore, is a singer-actor. And on this album Dietrich Henschel is the one. A major talent of Henschel's is to extend his theatrical abilities to the lied recital.

Mahler's piano versions of the Wunderhorn lieder represent the sole option for those desirous to record the complete set, but the piano option is not merely a negative choice. According to Donald Mithcell, "the orchestra is there, locked with the piano accompaniments andy struggling to get out". The piano versions are so suggestive of the orchestral texture and coloring, and they are so much more transparent with respect to Mahler's contrapuntal interlacing, that nothing is lost in the hands of a good piano player.

This is where Boris Berezovsky enters the picture. Boris has performed in the most prestigious concert series of our time, and he is reputed for his colorfully grandiose playing which is just the thing to show the orchestral sonorities and textures. Since Mahler’s orchestral lied settings do not always converge with a singer’s needs (or rather: since few orchestras know how to tailor their performance to a singer’s needs), the piano version is a more viable alternative, if at least it is performed by a player who knows to bring out both the grandeur and the poetry in Mahler’s music.

Gustav Mahler (composer)More information
08-10-2014 Classicagenda.fr
"From a strictly musical point of view, nothing compares to Dietrich Henschel’s exceptional interpretation of the Wunderhorn. His powerfully expressive voice provides us with a precious key into Mahler’s universe. By exploring all aspects of the language and emotions of these songs, Dietrich Henschel gives us a particularly authentic and poignant interpretation of the Wunderhorn."
19-04-2014 Fanfare
"The sound quality captures both artists with perfect clarity. "
01-10-2013 Kulturspiegel
"His declamatory singing creates true psychological roentgenograms"
07-06-2013 Platomania
"Master pianist Boris Berzosky manages to convince in these Mahler 'Lieder' (originally composed for orchestra) and Henschel's years of experience are heard in every single note."
Music Web International
"Dietrich Henschel and Boris Berezovsky have guided us in masterly fashion towards the Mahlerian eternal life and we can only be grateful to have had the opportunity to wander in their company."