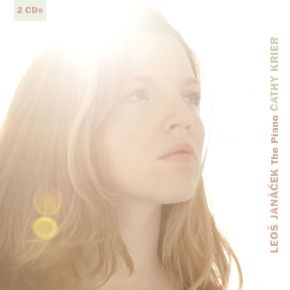 Alain Steffen: What specific challenges await the performer in the piano pieces of Leoš Janacék?
What characterizes him as a composer?
Cathy Krier: To begin with, Janacék is difficult to categorize: he doesn’t correspond to our usual clichés.
Milan Kundera once described him as a “meteorite that landed in music history”. You can tell from reading his
letters and the advice he gave his students that Janacék was always trying to show something about the
essence of music. No unnecessary flourishes or superficial embellishments: instead, he focused his attention
on that which is truly elementary. With such a modern attitude, Janacék was way ahead of his time. Today,
when we perform his music, I think that same kind of attitude can help us discover a new form of authenticity.
A.S.: Where do we find that new authenticity?
C.K.: If we seriously take the composer’s wish that we focus on the essential, as performers and as listeners
we can discover a whole new world of finely nuanced structures in miniature, punctuated by several distinct
changes of mood within one piece. Those changes can be abrupt, occasionally giving rise to a certain form of
brutality. Janacék’s scores are the only ones I know that contain the indication con durezza, “with harshness”.
The more I study and perform his music, the more it becomes clear that he was not trying to write music that
sounded “beautiful”. What he was searching for, instead, was authentic, stark expression – nevertheless
contained within a clear, condensed form. In the midst of this learning process I started to realize that this
composer’s mindset actually coincides very closely with my own personal approach to music.
Thus, while delving deeper and deeper into his music, I felt that Janacék was drawing closer. (excerpt from an
interview of Alain Steffen with Cathy Krier from the liner notes)
Born in Luxembourg in 1985, Cathy began taking piano lessons at the Luxembourg Conservatoire at the age
of five. In 1999 she was admitted to Professor Pavel Gililov´s masterclass at the Hochschule für Musik und
Tanz in Cologne.…..…. Further, she has been invited to be ‘Artist in Residence’ at the Biermans-Lapôtre
Foundation in Paris where she developed this present concepts after long years of studying Janácek’s music.
www.cathykrier.com
Catalog: Recital Cathy Krier (Scarlatti, Chopin, Haydn, Müllenbach, Dutilleux) CAvi8553137