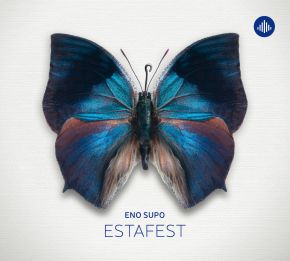 Four high profile improvisers out of the Dutch jazz scene teamed up and formed Estafest.
Anton Goudsmit and Oene van Geel played in duo and so did Mete Erker and Jeroen van Vliet. The idea to combine these duos was thrilling for all of them and created a whole new world of possibilities.

Four unique musicians, each a match for the other, create cutting edge music where new directions can be taken any moment. They all contribute brilliant short pieces  which are shaped on stage, creating an atmosphere where both the audience and the players are swept along by the power of the moment.

Jeroen van Vliet about this new project: "Estafest live!, our first recording was a lively prelude to this new album, recorded among the peace and tranquility of the beautiful Fattoria Musica studio. From our concerts we knew that Estafest has many facets, that in addition to groove and adventure was also poetry and beautiful sounds.

It was a big party exploring all kinds of new things and setting these pieces to disc with the 4 of us and engineer Chris Weeda, and we are really happy with the results."

The musical result is exciting, magnificent, hilarious and breathtaking.

The press about their previous album 'Live':
According to the jury of the VPRO Boy Edgar Award, Oene van Geel distinguishes "with a superior swing, an enormous ability to improvise, a thorough knowledge of the history of jazz and a permanent curiosity to different genres, whereby he sets an example in the crossover world on an atypical manner.
- NRC Handelsblad

25-07-2014 Jazzflits
"His touch, but especially his lyrical approach of music and timbre, makes him recognizable and beloved."
11-07-2014 Jazzenzo
"Estafest treats improvised music in full width and length. Intimate fragments are pushed ingeniously together, while in the (less common) parts where the speed is slightly higher, it prooves over and over again that the fantasy of these four musicians lead to different, alsway surprising results."
16-06-2014 Limburgs Dagblad
"The strength of this album lies in the wealth of ideas and great music. Jazz, chamber music and folk blend effortlessly together."
21-05-2014 Musicframes
"‘Eno Supo’ is an exciting album that gets even more impressive, after a few times listening"
21-05-2014 Rootstime
"Very special what these gentleman made here. quite different than their normal surroundings but I dare to say that this is one of the best jazz albums of the year! "
01-05-2014 Nederlands Dagblad
"But this second album has moments ranging from tranquil beauty to lavish collective improvisations."
27-04-2014 Pat sounds blogspot
"Not often do we hear  four talented artists play so strong together, and step outside of their comfort zone.. For that reason, this record is perhaps the most impressive I've heard this year in the jazz field."
24-04-2014 Wondering Sounds
" The quartet members layer and weave their music in a way to give it a fullness that might indicate a sound from a larger ensemble. Even the moments of dissonance have a certain ambiance that isn’t abrasive and allows for moments of sheer beauty to spring forth. Just a gorgeous album."
23-04-2014 Jazzenzo
"This album presentation from Estafest was a special experience that makes you curious for more."
23-04-2014 De Volkskrant
"The pieces are alternately impressionistic, melancholic and menacing."
22-04-2014 NRCHandelsblad
"The wooly basis of the piano, the repetitive notes of the tenor saxophone and a victory dance of violin and guitar; These are the moments that Estafest peaks."