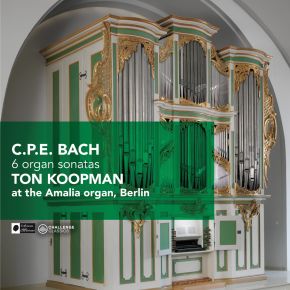 C.P.E. Bach left a substantial body of work after his death. He left relatively few works for organ. These have given rise to considerable debate: how many of his works have been lost, and should a particular piece be played on the organ or some other keyboard instrument? There are also several questions surrounding his organ sonatas: did he write five or six of them? In any event, only one of them survives in manuscript, in the collection of Amalia of Prussia. Princess Anna Amalia,youngest sister of Frederick the Great, played the organ and was the fortunate owner of no fewer than two organs. The organ on which I recorded these six sonatas once belonged to her, having been installed in her Berlin mansion in 1755, the same year that marked the appearance of four of these Organ Sonatas. The instrument, manufactured by Peter Migendt, has two manuals and a pedal board, with what was an exceptional range for those days. In the period 1753-1755, C.P.E. Bach was keenly looking for alternative positions. Was he perhaps hoping for an appointment with the princess? It appears that she was not altogether taken by C.P.E. Bach’s style, rather preferring his father’s music.
It was a delight to be allowed to record these works on this beautiful Migendt organ, following its recent restoration.

Carl Philipp Emanuel Bach (composer)More information
01-06-2015 EOS Classical Music
""Bach junior's modest organ works perfectly fine thank you." "
30-09-2014 Choir & Organ
"Koopman's rhetorical and individual playing suits this music excellently"
01-09-2014 BBC Music Magazine
"Effortless idiomatic and precise, this playing is a stand-out tercentenary tribute."
01-08-2014 Early Music Review
"Those who prefer Koopman to CPE Bach will love this"
27-06-2014 The Irish Times
"And the attractiveness of his new recording of six organ sonatas is greatly heightened by the use of a gorgeous-sounding historic instrument that the composer knew and oplayed. A near perfect match of music, instrument and performer."
07-05-2014 Opus Klassiek
"Koopman made a right choice by choosing this organ"
BBC Music Magazine
""Effortlessly idiomatic and precise, this playing is a standout tercentenary tribute.""
Early Music Review
""Ton Koopman brings his own quirky interpretations to all he plays.""