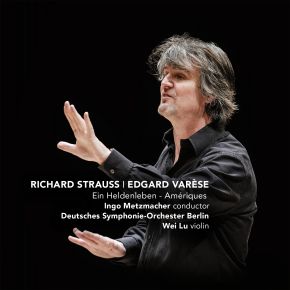 Even though the title Ein Heldenleben (A Hero' Life) may not suggest it, both symphonic poems recorded on this disc were dreams of the future at the time of their premieres. The elaborate soundscapes of big orchestras - Varèse's original version of the Amériques requires 142 musicians! - were unheard of at the turn of the century and even in the 1920s.

New sounds and exotic instruments, however, not only push musical understanding, but also allow the audience to catch a glimpse of a composer's life and experiences. Strauss thus gives us his ideas about certain things and persons in his immediate surroundings, while Varèse invites the audience with steamboat whistles and crow calls to experience Paris as he did: the lonely fog horns, the shrill whistles and the sense of adventure America has given him since his childhood days.

Edgard Varèse (composer)More information
Ingo Metzmacher (conductor)More information
27-05-2015 Mostly Classic Sawaya
"N.A."
01-02-2015 International Record Review
"["].. Orchestra and conductor ended their three-year association with an electrifying take on Mahler's Seventh Symphony that would be well worth issuing on disc.""
11-01-2015 Scotland on sunday
"['']...This thoughtful recording of the first version of the work, by the German Symphony Orchestra Berlin under Ingo Metzmacher, brings out both brashness and complexity of a piece that caused outrage at its premiere but has since become a regular concert feature...['']"
01-12-2014 GRAMOPHONE
"['']...You could spend many hours shifting between the first and second versions (though don't tell the neighbours it was my idea) but unlike with Ein Heldenleben i wouldn't care to predict which you'd end up preffering, possibly this one, a fascinating and exciting CD...['']"
01-12-2014 Music Web International
"['']...This astute pairing is one of the most remarkable releasess I've heard this year...['']
['']...Challenge Classics have provided the quality of sonics needed to display these flamboyant scores at their finest."

01-12-2014 Music Web International
"['']...A challenging but rewarding coupling well performed and superbly engineerd...['']"
17-11-2014 Fono Forum
"Tip - Metzmacher scintillate in showing the interconnections in a fascinating way. (...) An acoustic pattern with exemplary depth of focus supports the analytic style of Metzmacher. "
10-11-2014 BR Prisma
"Ingo Metzmacher and the Deutsche Symphonie Orchester Berlin play Heldenleben fascinating and sensual, pedestrian and in an absolutely not heroic way, which suits the piece well"
01-11-2014 theartsdesk.com
"This is a supremely entertaining, snappily played performance, with waspish woodwinds and a visceral, exciting battle scene. Wei Lu's violin solos are glorious. The horns are magnificent. Ein Heldenleben sometimes sags, but Metzmacher's canny pacing avoids any trace of flabbiness."
01-11-2014 The Arts Desk
""There's bone-crunching dissonance, rhythmic flair and some slinky, voluptuous tunes.""
29-10-2014 Music Web International
"This excellent new release offers stunning, twenty four carat gold versions of Ein Heldenleben and Amériques. This astute pairing is one of the most remarkable releases I’ve heard this year."
25-10-2014 Tageblatt
"The Deutschen Symphonie Orchester Berlin masters to realise this musical score in a fascinating way. With Metzmacher it sounds wonderful since he quits the pathos whenever possible."