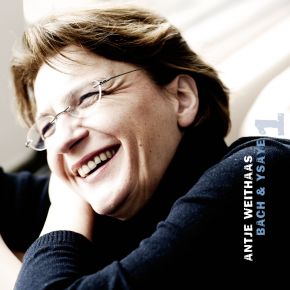 Antje Weithaas launches her trilogy of solo violin CDs with the first work in each cycle.

It was Antje Weithaas’s own idea to jointly record Johann Sebastian Bach’s six sonatas and partitas for solo violin in conjunction with Eugène Ysaÿe’s six solo violin sonatas. “The works by Bach are  rather well-known”, she remarks. “But Ysaÿe is invariably shoved  into the virtuoso corner, but as a composer he is to be taken quite seriously!”.

Eugène Ysaÿe‘s son remembers that his father started composing the solo violin sonatas when he heard Joseph Szigeti, a violinist younger than himself, play Bach in Brussels in 1923. Antje Weithaas sees many parallels with Bach’s Sonata No. 1 for Solo Violin,  BWV 1001: “The works have similar structures.”

“Both composers wrote technically challenging pieces featuring double stops  and ornamental figurations. Although there is no proof for such connections, I’m quite certain that  Ysaÿe had them in mind.”  The fugues, in each case, represent quite a challenge. Each composer demands double and  multiple stops from an instrument normally designed to play one part at a time. “The notes are  written directly on top of one another, as the composer must have imagined them in his head, but  not in the way they are to be executed. Since the performance tradition has not survived, we can  only make guesses.”