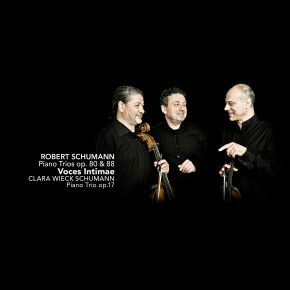 There is no equal in music history to the fruitful intertwining of human and artistic affair between Robert Schumann (Zwickau 18010 – Endenich 1856) and Clara Wieck (Leipzig 1819 – Frankfurt am Main 19896). The peculiar stature of these two figures goes even beyond the exceptional value of their individual work and the significant role they took on for romantic music and its promotion and development. The works of Robert and Clara interpreted in this CD by the Trio Voces Intimae are interwoven with secrets, hints and references to the relationship between the two; from the magnificent Trio in G minor op.17, perhaps Clara’s masterpiece, written when she was 27 years old in 1846. Not able to travel, the musician was forced to cancel her tour and focus on this composition, testing her abilities in counterpoint writing after intensely studying Bach’s opus with her husband during the previous years. The work is influenced by Schumann’s contemporary writing, and conveys Felix Mendelssohn’s teachings in chamber music language. Robert Schumann’s Fantasiestücke in A minor op. 88, was written during the very fruitful 1842. His op.88 brings together 4 pages of different character (Romance, Humoreske, Duett and Finale), with the common trifold Lied form and a common affectionate lyricism of melodic lines. The Trio in F major op.80 is from 1847. In this Trio the counterpoint writing is especially displayed from the first movement, but it’s in the third movement that Schumann displays the apex of his chamber music art. 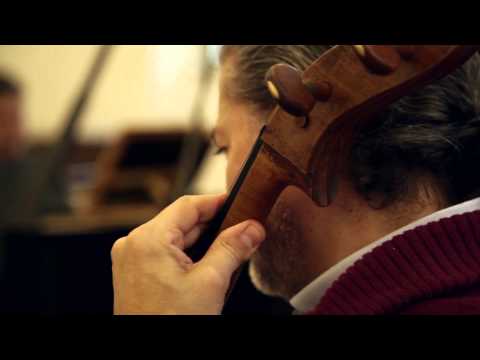 Clara Wieck Schumann (composer)More information
01-08-2015 Klassieke Zaken
"[''].. You can hear the fruits (of the labor) in the snappy effect of the finale, a majestic fugato.""
20-07-2015 Fono Forum
""And one thinks: This is how Schumann should be played with exactly this artistical paradox between sensibility and hardness. There are few who reach this Schumann-tone. Voces intimae are one of them."
Music 4,5 stars
Sound 4 stars"

18-07-2015 klassik.com
""The trio Voces Intimae lives up to it's name and submits a exemplary, details showing recording of three paino trio works from Robert and Clara Schumann. The liveliness, intelligence, warmth and intimacy of the performance puts it into the first row of Schumann piano trio recordings. What a phrasing, what subtle shadings, what a sense for sound!"
Interpretation 5/5
Sound quality 5/5
Repertoire value 5/5
Booklet 4/5"


04-07-2015 Telegraaf
"3,5 stars
The three Italian musicians capture the notes of Schumann with a southern generous expression. While the cello purrs comfortably, the sound of the violin is sometimes a bit thin and penetrating. The trio sound is also very direct. The listener finds himself in the middle of the music."

29-06-2015 MDR Figaro
""Inspired and full of warmth shows also the Trio Voces intimae in his new interpretation of the three works: Pianist Riccardo Cecchetti, violinist  Luigi de Filippi and celliist Sandro Meo assets your audience from the very first tone or bow line to cast a spell on. For example, in devices  without the risk, too thick to apply, make the music inherent enormous voltage significantly.""
24-06-2015 sinfinimusic.com
""The trio Voces Intimae are precisely that what its name suggests, and just like on the first Schumann cd the trio gives us glowing performances.""
24-06-2015 De Volkskrant
"4****stars
"It is especially the downy,very refined toucher of pianist Riccardo Cecchetti that lifts the playing of this trio above the level of other ensembles with the same repertoire.”"

24-06-2015 De Volkskrant
""It is in particular the downy, extremely delicate toucher of the pianist Riccardo Cecchetti that the playing of this trio does stand out against that of comparable ensembles.""
Radio 4 CD van de Week
"Radio 4 CD of the Week"