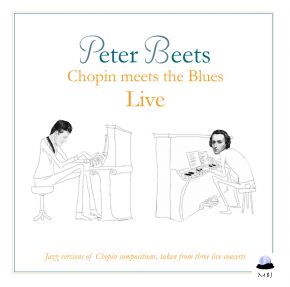 The music of Chopin has always had a strong attraction for me because of the power of its melodies and harmonies. The clean and simple relation between the two creates an inviting as well as compelling urgency. Like a pearl, it doesn’t ask for attention, it just naturally gets it.

There is a resemblance with the material in the Great American Songbook, the same unchallengable necessity. Being a jazz-performer I have extensively studied the work of Cole Porter, Irving Berlin, Jerome Kern, George Gershwin among many others and in my opinion Chopin, even without consciously having “met” the African scales and rhythms called Blues, paved the way for not only the above mentioned renowned songwriters but also for great masters of jazz improvisation as Charlie Parker, Bud Powell, Barry Harris and Oscar Peterson to name a few. Chopin enriched the harmonics, wrote easily recognizable and singable melodies and when his melancholy shows in chromatic embellishments (“blue” notes) he in fact created the universal language of contemporary jazz, called Bebop. It is my sincere desire that all over the world jazzmusicians will explore the treasure-chest filled with the works of the classical composers in an endeavour to implement these gifts in their musical expression.

On this CD you will hear six live tracks of three different concerts I gave with the trio. I hope and trust you will enjoy my honest tribute to Chopin.

Peter Beets (soloist)More information
01-10-2015 Doctor Jazz Magazine
"[''].. It's clear that he choses a melodic way of playing on the piano with virtuoso improvisations.""
01-07-2015 Jazzism
""The virtuoso Beets and his men are swinging non-stop, giving each other on various moments wings.""
06-05-2015 Jazzenzo
""Peter Beets has on his new album three nocturnes, two preludes and one mazurka transformed into swinging festivals.""
01-05-2015 Bob's Jazz Blog
""It's become a classic swinging and responsible production of extraordinarily high level, where in particular the respect for the work of Chopin sounds through.'" "