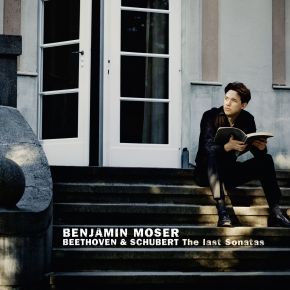 Benjamin, for your new CD recording you have selected Beethoven’s and Schubert’s very last piano sonatas. Why have you chosen these works specifically, just now, in 2014?
The question is justified, particularly since they have been recorded by great masters on countless occasions. In view of the great artistic maturity required to climb these twin Himalaya peaks of piano repertoire, it is often said – quite rightly, no doubt – that the older the performer, the better. But after having devoted my first two studio recordings to Russian and French music respectively, I found it important to finally bring out an album devoted to Viennese Classicism.
While I was still a student, but then particularly during the last three or four years, I’ve been intensely studying Beethoven’s last sonatas and I’ve often performed Op. 111 in concert. My first idea was to make a Beethoven recording with the last three sonatas, but then I thought it would certainly be interesting to contrast the last Beethoven Sonata with the last one by Schubert, D.960  (incidentally, a combination not so often recorded on one album until now). “Late works” have always held a special place in my heart. Bach’s Art of Fugue, the “Ninth” symphonies of Beethoven, Bruckner and Mahler, Beethoven’s late string quartets, obviously his last piano sonatas, then the late Brahms intermezzi and many more, are all works I particularly love and by which I am profoundly moved whenever I hear them. They contain so much mystery and mysticism; words come to mind such as Weltumarmumg (embracing the world), Weltschmerz, piety, Abschied (farewell), thankfulness, abstraction, highest mastery, and holiness.